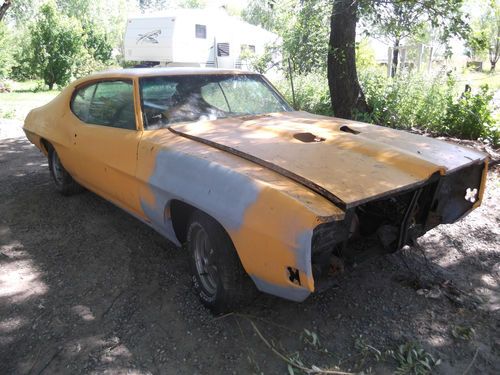 Condition: UsedA vehicle is considered used if it has been registered and issued a title. Used vehicles have had at least one previous owner. The condition of the exterior, interior and engine can vary depending on the vehicle's history. See the seller's listing for full details and description of any imperfections.Seller Notes:"Car needs total restoration. This car is a project."

Here is an opportunity for someone to buy an ultra rare Ram IV Judge project.  This car needs total restoration.  It is a PHS documented Ram IV Judge and the most sought after original color of orbit orange with black interior.  This is one of 72 Ram IV automatic Judges made in 1970.  How many of those were in orbit orange is unknown but I would guess in the single digits.  The car does include all of its original Rally II wheels as well as miscellaneous parts which does include the endura nose.  This is also a factory hood tach car.  When this car is done it could be worth 6 figures or more.  I do have the correct Ram IV heads for this car as well as the correct nodular rearend.  These are not included in this sale but if Buyer is interested these items will be for sale as well.  Buyer fully understands that this car is a full restoration project and buying this car as is without any type of warranties implied or expressed.  Buyer is responsible for shipping.  Mileage is unknown. There is a $1000 deposit due within 3 days of close of auction and balance to be paid in 7 days of auction.  I will not reveal my reserve.  If interested please bid what you want to pay.  The car is located in the state of Washington.  Good Luck.