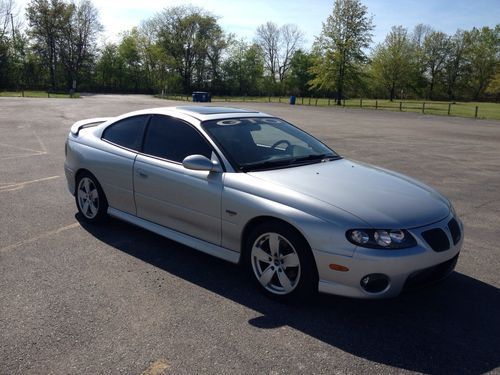 Two 57mm polished turbonetics turbos, custom fabricated headers. Each header has a turbonetics wastgate. The wastgate dump tubes exhaust under the front of the car. All cold pipes are aluminum, and it has a turbonetics blowoff valve, and intecooler. The injectors are 65 pound per hour,and fed from a Walbro 400lph in tank pump and an MSD boost a pump to raise fuel pump voltage on rise of boost. It has a Moroso catch can to vent the crank case. The engine internals are all factory except for ARP rod bolts to handle more boost. The tuners a diablo trinity which is a touch screen monitor that can stay in the car and be used as gauges as well as a scan tool. Many different tunes can be loaded into the tuner and changed in seconds by the touch of a button. Currently there is only one tune. It is set up for 93 octane pump gas and 7 Pounds of boost with very little timing. Some tuners say that E-85 pump gas makes for a better tune. The car runs very well and is very dependable on the current tune, so I didn't see any reason to change it. The exhaust is full duel SLP exhaust with mufflers but no cats. It is not much louder than stock exhaust. The transmission is a turbo 400 with shift kit and a 3000 rpm Yank stall converter. The drive shaft is a carbon fiber shaft with aluminum yokes. The suspension is all stock. The tires have around 80% tread left , but are starting to dry rot.
Interior:
The interior is in near perfect condition. The only thing that is not original is the Pioneer DVD /CD player with touch screen navigation. It looks like factory navigation.
Exterior:
The paint is in great shape, and is all original. There is a small ding in the drivers side rear quarter panel, and the plastic door handle inserts need some touch up.
Other:
When I originally put the turbo setup together, I wrapped all of the hot pipes with header wrap. Over last winter I had all of the hot pipes ceramic coated and polished. When I put the headers back on I used fel-pro header gaskets and they leak a little bit. When I originally put the headers on I used factory GM manifold gaskets and had no leaks.
The car appears stock, and sounds stock, and still has air conditioning.
On the current tune the car made 543HP and 610 ft lbs of TQ. This is very safe and dependable. The current fuel system is capable of 750Hp , and the turbos are capable of over 1000HP.
Payment options:
PayPal , wire transfer, or cash