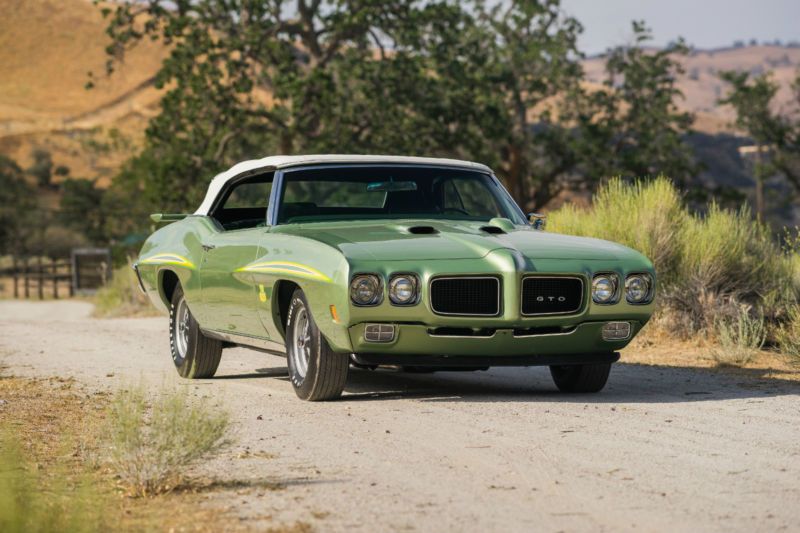 1970 GTO Judge Convertible
This 1970 GTO “Judge” Convertible is one of only 168 Judge Convertibles built in 1970. The car has the
original 100% numbers matching Ram Air III engine that it was born with and has been carefully restored to “as
new” condition. If you’ve been searching for a no excuse 1970 Judge Convertible, with the original engine,
this is your chance to get a top-notch GTO that will bring home a trophy at the next GTOAA or Pontiac Nationals.
This car started life in New York and was originally shipped to Piehler Pontiac, in Rochester, New York and was
carefully pampered and very well cared for by the first owner.
When the current owner purchased this car, a decision was made to do a full frame-off restoration to give the car a
“fresh” look. The car was completely disassembled and stripped to bare metal. The frame was removed and the
entire drivetrain was rebuilt. The body of this vehicle was gone over from front to back and the body fit is laser
straight and better than new. Once the body was prepared, it was given a fresh coat of the correct Palisade Green
(code 45), using the best modern DuPont base coat clear-coat paint. The frame was also stripped and all chassis
components were replaced and refinished in the correct original factory finishes.
While the engine was out of the car, it was sent out and completely rebuilt. The original 400 Ram Air III engine
(YZ) block was honed and new pistons, rings and bearings installed. The crank was checked and lightly refinished.
The original Ram Air cylinder heads were checked and given a valve job, along with new valves and valve springs.
Everything was reassembled and the entire engine assembly was given a coat of the correct Pontiac silver-blue
engine paint.
No stone was left unturned and the interior was completely redone with nothing but the best of correct materials.
All instruments and gauges were checked for operation and repaired or replaced, if necessary. All wire harnesses
were replaced with new. The restoration on this GTO is 100% “factory correct”, right down to the original
style Firestone tires.
This is a top notch car that is worthy of going to a good home! It will make a “star” addition to any car
collection.
GTO Judge Options Vin # 242670P158060
The Judge Option
400 4BBL Ram Air III Engine (348 HP)
400 Turbo Hydramatic
G70X14 Firestone Wide O Oval Tires
AM/FM Radio
Rear Speaker
Out Side Remote Mirror
Electric Clock
Hood Tach
Center Console
Power Trunk Release
Power Steering
Power Disc Brakes
Ride Handle Package
Original Drive Train right down to the original spark plug wires.