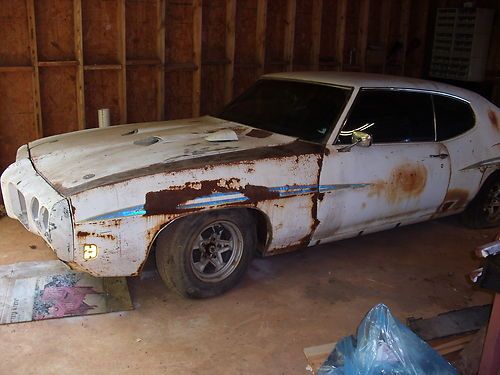 Condition: UsedA vehicle is considered used if it has been registered and issued a title. Used vehicles have had at least one previous owner. The condition of the exterior, interior and engine can vary depending on the vehicle's history. See the seller's listing for full details and description of any imperfections.Seller Notes:"Rare find an original matching numbers 1970 Pontiac Gto Judge Ram Air III. This car has 99% of all it's original parts from factory. Matching numbers engine , transmission. This a (project car), it is not running. This car will have to be restored, but again 99% of the original parts are there. I have a clear title in hand. I have PHS (Pontiac Historical Society) documentation on this car. Thanks for looking."

1970 Pontiac GTO ( Judge) Ram Air III. This car is ready to be restored . 99% complete with original parts. The car will need body work and engine work. I do not know the condition of the transmission, it is the original transmission and engine. The engine is(not running). Radio is missing. The car is located in Ellenwood, Georgia.  I have a Clear Title in hand as well as PHS documentation on this car. Payment options for winning bidder are Cash, Certified check or Money Order . A Deposit of $300 (non-refundable) due within 48 hours auction end, through Paypal. All 0 feedback bidders will be rejected unless I am contacted before bidding. Thanks for looking.