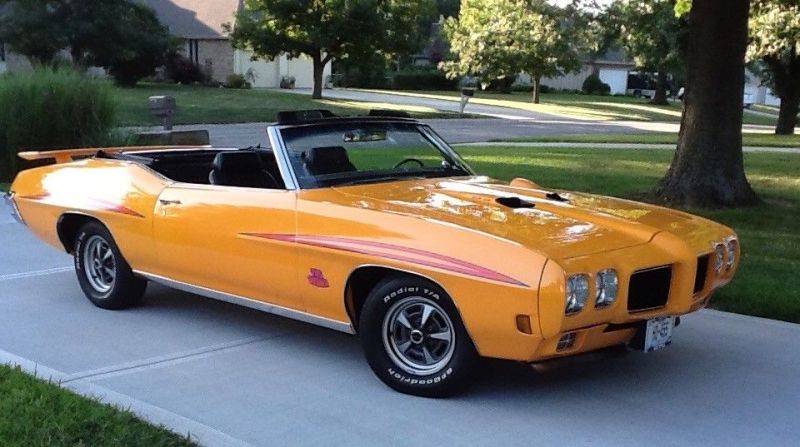 If you have any questions or would like to view the car in person please email me at: bernardbggonnerman@newcastlefans.com .

UP FOR SALE IS MY 1970 JUDGE CONVERTIBLE TRIBUTE 455. THIS IS A DOCUMENTED 3 OWNER CAR . I HAVE THE ORIGINAL BUILD
SHEET AND PROTECTO
PLATE FROM THE ORIGINAL OWNER. THE SECOND OWNER DID A COMPLETE FRAME OFF ROTISSERIE RESTORATION BY GTO EXPERT JOHN
KANE OF BEDFORD PA. ALL METAL IS OEM AND IS FACTORY CORRECT. A NEW BLACK TOP WAS INSTALLED WITH NEW REAR WINDOW. AS
YOU CAN SEE THE PAINT JOB IS THE INFAMOUS ORBIT ORANGE AND IS IN GREAT SHAPE BUT DOES HAVE A FEW CHIPS FROM BEING
MY DALLY DRIVE WHEN IT WAS NICE OUT. THE MOTOR IS A REPLACEMENT - HAVE DOCUMENTATION FROM DEALER AND NOW HAS 15,500
MILES ON IT.THE ORIGINAL TRANSMISSION WAS ALSO REBUILT AT THE SAME TIME. THE INTERIOR WAS ALL BRAND NEW AT THE SAME
TIME. AS THE THIRD OWNER I ADDED THE RAM AIR KIT,
HOOD TAC AND THE VACUUM OPERATED EXHAUST. THE VOE WAS A SHORT LIVED OPTION IN 1970 THAT WAS INSTALLED ON AROUND 240
CARS BEFORE IT WAS PULLED BY GM BRASS. BY PULLING THE KNOB NEXT TO THE RAM AIR IT OPENED A FLAP IN THE MUFFLER THAT
ALLOWED THE EXHAUST TO FLOW STRAIGHT THRU THE MUFFLER. THE 455 MOTOR HAS THE CORRECT #64 HEADS WITH RAM AIR EXHAUST
MANIFOLDS, CORRECT CARB,INTAKE MANIFOLD, AND DISTRIBUTOR.
CAR ALSO STILL RETAINS ITS ORIGINAL AM/FM 8 TRACK TAPE PLAYER THAT STILL WORKS. CAR IS PHS DOCUMENTED.ONLY 399
CONVERTIBLES IN 1970 WERE ORDERED WITH THE L-75 455 HO AND ONLY 241 CAME WITH THE M-40 TURBO 400.
IF YOU DON'T LIKE BEING THE CENTER OF ATTENTION THIS CAR IS NOT FOR YOU.