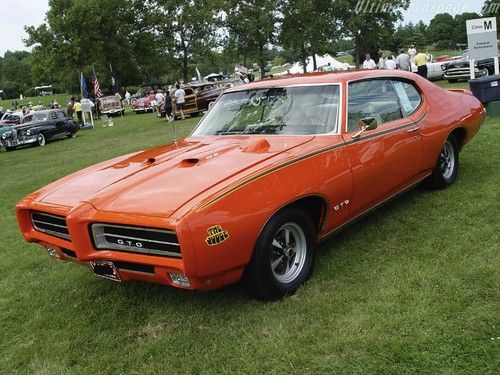 Condition: Used: A vehicle is considered used if it has been registered and issued a title. Used vehicles have had at least one previous owner. The condition of the exterior, interior and engine can vary depending on the vehicle's history. See the seller's listing for full details and description of any imperfections. ...
THE ICON OF MUSCLE CARS HAS ARRIVED
1969 GTO JUDGE RAM AIR III
MATCHING NUMBERS
OLDER RESTORATION LOOKS GREAT
ORIGINAL RAM AIR III "YZ" CODE ENGINE
ORIGINAL HYDROMATIC "PQ" AUTO TRANS
RARE CAROUSEL RED WITH PARCHMENT WHITE INTERIOR
TONS OF DOCUMENTATION INCLUDING PROTECT-O-PLATE & PHS DOCUMENTATION
ORIGINAL 69 JUDGE'S ARE HARD TO FIND ESPECIALLY WITH MATCHING #'S
DON'T WAIT AS WE'VE SET A LOW RESERVE FOR FAST SALE
SEE NADA VALUE BELOW
AS THE GTO JUST ARRIVED WE WILL BE LISTING MORE PHOTOS SHORTLY
AS THIS IS ALSO LISTED LOCALLY WE RESERVE THE RIGHT TO END THE AD AT ANY TIME
IF YOUR INTERESTED OR HAVE ANY QUESTIONS PLEASE LET US KNOW.
DON'T WAIT THESE JUDGE'S DONT COME AROUND TOO OFTEN!!