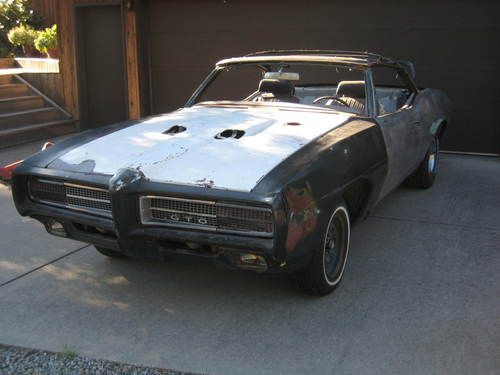 This is a real GTO Convertible.  It needs a total restoration.  As near as I can tell , it was last licensed in 1980.  It looks like it has never been wrecked.  Doors and trunk open and close as they should, with good gaps.  There is some rust in the lower front fenders and in the cowl at the edge of the dash.  The cowl rust  does not show with the lower windshield  molding on, but should be repaired.  The rest of the car is rust free.  The trunk, floors, frame, rockers, and floor braces are excellent.  No body sag in the cowl.  Everything solid as it can be.  The quarter panels were radiused for clearance for big tires.  Left front fender and doors need body work.  They do not need replaced.  Right front fender is junk, but an original replacement is included.  It needs some body work , but is a good , useable original fender.  The urethane bumper is straight, but the urethane is deteriorated.  A better bumper is included as pictured.  Hood has a little damage on the right front corner, and I believe the hole in the hood is factory for a tach.  The hood has not been folded and is not rusty.  The hood is not original to the car.  Quarters can be repaired or replaced,  New quarter skins are included.  Has original 3.55  open rear.  I don't know if it is the original transmission or not, but I have no reason to believe that it isn't.  Does not have its original motor.  The motor in it is a 69  400 with the right casting number, block, heads, intake, and carburetor.  All parts are date matched and correctly dated for this car.  Fan shroud is NOS.  Convertible top bows are in excellent condition,  not seized up.  Convertible top motor has been tested good.  All convertible trim, windshield, and top well trim  has been professionally restored.  These parts are still wrapped, although not pictured , they are included.  A set of 5 BFG radial T/A  tires 245 60  14 Mounted on 5 restored 14 by 7 rally ll  wheels with 4 new center caps are included with car, but not pictured.  There are no trim rings or lug nuts.    I have no rear bumper,  I do have all the brackets and hardware.  They are all excellent.  I have no radiator or exhaust manifolds.  Original color is midnight green, White top, and black interior.  Options are:  automatic transmission, radio, retractable headlamps, console, and power steering.  The headlamp system is complete and moves freely by hand.  I have not had vacuum to it.  If you are looking for  GTO project,  keep in mind that this car is structurally sound, it costs so much more to restore one that isn't structurally sound and they are never quite right when they are done.  I f you have any other questions,  I would prefer a phone call over an email.  My name is Cal and my phone Number is  509-226-1356.