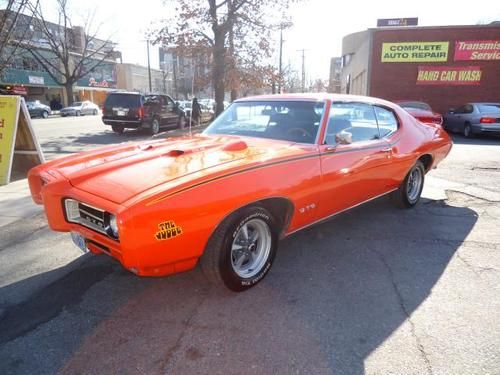 Very solid example of the highly sought after Judge. Three owner car that has been with last owner 14 years. Sold new in Florida and has always been well cared for. Factory 400 Ram Air III engine that has 69 block casting # but service replacement block code. We are guessing this was done early in its life at a Pontiac dealer as last two owners state this engine has been in the car for over 30 years. Car was originally an automatic car but now has correct M21 4 speed transmission with hurst shifter and center console. Original trans comes with the car along with torque converter, center console etc. Last owner just wanted a 4 speed car. Body is very straight and rust free with no accidents ever and older but still very nice correct Carousel Red paint. Does have PHS docs and copy of build sheet which show that it was very nicely optioned when new. Factory A/C that works fantastic along with power steering and disc brake package, safe-t-track, Ram air hood etc. Picture of build sheet is available upon request. Interior is very nice and everything functions as it should. Car runs and drives very strong with amazingly smooth ride. Underneath is equally impressive with no rust issues anywhere and just solid all around. Excellent chance to own a rare muscle car without braking the bank.