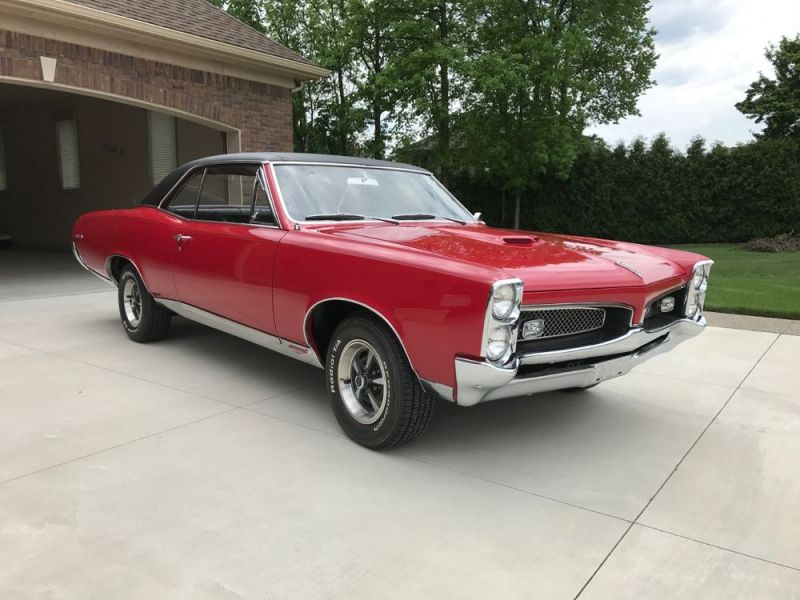 If you have any questions or would like to view the car in person please email me at: brittanibbbrath@ukme.com .

This 1967 (242) GTO is documented with PHS paperwork. It is a true (R2) regimental red, black cordova top, black interior trim car. It retains its matching number 400 engine. Please see the PHS photo for the factory options including the rare roof
rail & reading lamps. The following list is just a fraction of what was done during the restoration :

· New complete floor pan, trunk pan, and drop offs, inner and outer wheels wells. New front fenders. I was
restoring the GTO to last for several generations and wanted it to be the most solid body you could find. Anything
that was not 100% was removed and replaced. There will be nothing coming back to haunt future owners of this car.
It is as good or better than what Pontiac sold in 1967.
· Engine rebuilt $4,024 by Detroit Muscle
· Carburetors rebuilt and re-plated $622 Cliffs Performance
· Seat belts restored $537 by Ssnake-oyl
· Dash pad $615 Just Dash
· Complete Legendary Auto Interior (new foam and seat covers, door panels, headliner $977)
· Gardner (show package) exhaust system $1045
· Over $2,000 spent on re-chroming (center consul, interior map lights, door handles, side vent window
frame, valve covers, air cleaner, etc.
· Instrument cluster restored by well know restorer
· All new side, windshield and back glass (correct LOF)
· New tires and brakes.