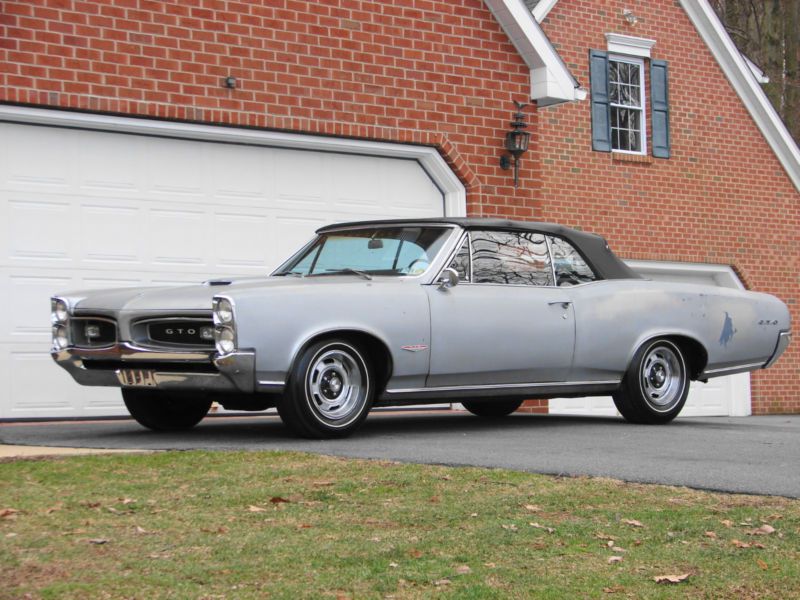 1966 GTO PHS documented numbers matching tri-power convertible. Found in a garage where it
had been stored since 1989 & not driven since. Engine does not run has rod bearing knock but it does turn by hand.
Sold new at a local Regseter Pontiac Upper Darby, Pennsylvania dealership. 1st owner was a female, owned car till
the mid 1970s & took very good care of the car. Second owner drove the cars for years before the engine developed
a bearing knock. The engine was then removed to check damage. The car was put into storage in 1989 as future
project, life happen, retired & moved south.
Since my recent purchase I put engine back into car to show it is nearly complete. The engine needs rebuilt &
does not run. The 389-360 hp tri-power engine is the original born with & matching numbers, block stamped YR,
cast number 9778789 with B 7 6 date, or February 7th 1966, cylinder heads cast # 093 with matching date of B 1 6.
Data plate shows this GTO was manufactured on the 03 D or March 4th week of 1966. Very nice original GM chrome air
cleaners & valve covers. Even the original spring clamp battery cables survived. Original unrestored tri-power
shows difficult to find vacuum linkage with survivor gold coloring on the carburetors.
The title shows 136,000 but speedometer shows 103,000. Silver Platinum paint with black interior & top. One
repaint in the early 1980s. Overall a very solid car. This car has survivor qualities such as all original Delco
spiral shocks are intact, all its original T-3 headlamp bulbs. All original interior accept carpet. Seats, door
panels & dash pad show very nice original with no rips or tears. Trunk shows solid pan with original splatter
paint. Solid floors. Most of the chrome & trim is nice & bumpers look nearly new . Convertible top is still
serviceable.
PHS shows car equipped as follows;
-389-360hp Tri-power
-automatic transmission
-positraction rear with 3:55 gears
-rally I wheels with white wall tires
-pushbutton radio with power antenna
-door edge guards
-remote control mirror
-luggage compartment lamp
-glove box lamp
-ashtray lamp
-under hood lamp
-custom seat belts
-rally gauges & tachometer
-custom sport wood steering wheel
-bucket seats with console
-exhaust splitters
-power steering
- power brakes
-tinted soft ray glass
-floor mats ( front & rear)
Overall a very nice restorable GTO tri-power convertible. The condition is as we used to find them decades ago.
Very few project cars still have the original engine let alone the high horse power tri-power. Fix the mechanics
of this car & drive it as you restore it. Bring a trailer as car does not run & brakes do not work. Selling car
in as is where is condition with no warranty expressed or implied.