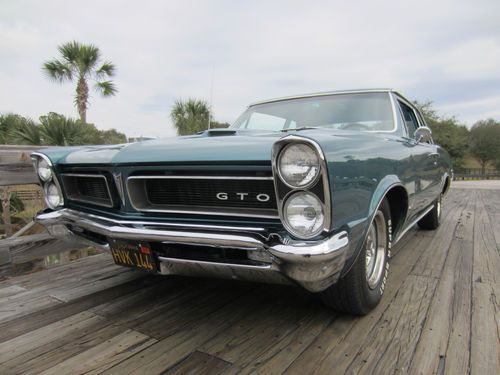 This beautiful 65 GTO is the rare coupe body style of which only 8300 were made out of a total of 76000 GTOs built in 1965.This car has a high quality base/clear repaint in the original color of teal turquoise with the body completely rust free and maintains original trunk and floors.The engine has been swaped for a 1966 GTO tri power motor with all newly rebuilt carbs.The Muncie M20 transmission was just rebuilt and new clutch and flywheel installed. It is equipped with power steering and all new front power disc brake system.The exhaust has Flowmaster 3 chamber mufflers which creates a mellow rumble.This car has been gone through, top to bottom, to make it a reliable cruiser,everything works except the clock.It has factory rally gauges including tach which all work.This GTO  has no oil leaks,dents,no paint bubbles, or issues needing repair. All chrome is excellent!  I have the PHS documentation from the Pontiac Historical Society proving it to be original GTO from the factory. Call for more info 407 814 0624    Dave