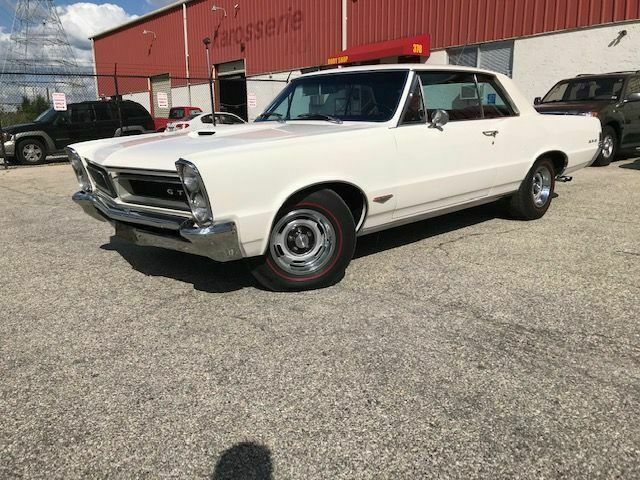 ENGINE: The car came equiped with a 4 barrel carb. In 1996 I bought a completely refurbished tri-power set up, all
invoices are included. The original intake manifold is included in the sale. In 2013 I had the motor proffessionaly
rebuilt by a well known engine builder in my area named Doug Myers. That rebuild included an upgraded Crower Baja
Beast camshaft part # 60915 and the motor slightly bored.The engine produces an estimated 390 horsepower and "runs
perfect." The GTO has traveled only about 500 miles since its engine rebuild. The original exhaust manifolds and
exhaust pipes are included with the sale. Equiped with headers and a custom stainless-steel exhaust system.

DRIVELINE: In 1965, buyers who purchased a GTO with the optional automatic transmission got the two-speed
Powerglide, either shifted on the column or via the floor-mounted shifter in the optional console. The floor
shifter and console were ordered on this car, but after purchase, I opted to upgrade to the more versatile
three-speed Turbo Hydra-Matic 350 transmission. For all of you wondering were I found the 3 speed factory
appearance console shift indicator, the company is called "SHIFT WORKS". At the time of the transmission swap, the
ring and pinon set was upgraded, as well, from the GTO's 3.55:1 ratio to a snappier 3.90 gear set with the
limited-slip Safe-T-Track differential. The original Powerglide transmission is included with the sale.

SUSPENSION AND CHASSIS: The suspension was rebuilt in 1999 and was completely gone through at that time, including
springs, shocks, ball joints and bushings. The rear coil springs feature helper air bags to adjust ride height.
Power steering came with this GTO in 1965. The brakes are power assisted and the booster retains its cadmium plated
finish and single-reservoir master cylinder. The wheels are the optional competition-type steel wheels, with brake
cooling slots otherwise known as the Pontiac Rallye I, with the correct center caps and trim rings in place. Coker
Redline Radial tires were installed in 2010 and still have 11/32 of tread left.

EXTERIOR: The Cameo Ivory finish is in fresh and presentable condition, the car has spent no time on a trailer and
has been driven from time to time during ownership, just like they should be.The paint still shows well. When I
purchased the car In1995, it had some very minor surface rust on the hood scoop, and some minor pitting around the
rear wheel arches. I own a body shop and media blasted the rust away, filling any pits with lead ( no bondo, or
plastic as we call it in our industry) and polyester before repainting the rear quarter panels. All panels are
straight and true. I supplied a video link @ the bottom of the page. The only modifications to the body took place
in the hood scoop. I opened the nostrils in the hood scoop and added a factory Pontiac pan and foam gasket to meet
the underside of the hood, allowing fresh air to funnel directly to the carburetors.

INTERIOR: Inside, the black interior is in completely original condition with only a handful of minor
modifications. The black seat upholstery shows no cracks and has firm padding underneath. The interior door panels
are in fine shape,the grab handles and armrests are a bit worn. The loop pile carpet is in excellent condition, as
is the headliner. The only significant modification is to the original radio. The dash retains the original head
unit, but it's been modified to operate on the FM frequency and features an amplifier. Two coaxial speakers have
been installed in the rear package shelf.