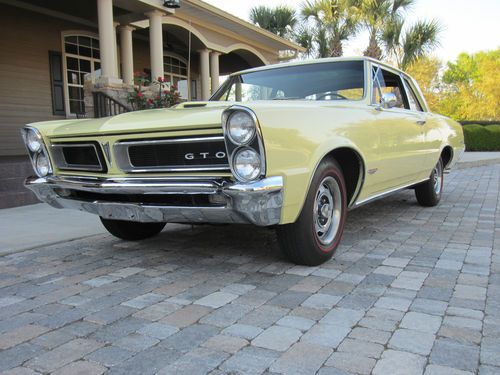 Here we have an extremely nice unmolested original 65 Gto as it came from the factory.This car maintains all original metal which never had any rust or damage repairs,therefore no rust or bondo anywhere! It has been repainted in its original color of mayfair maize a few years ago and is in show quality condition.All the chrome in excellent condition in and out.The car is completely numbers matching with original rebuilt engine and drivetrain.It has original working air conditioning,automatic transmission,positraction rearend,power steering,power brakes,original 4V carburetor,5 new Coker classic redline tires,new rally one rims,center console with factory vacume guage,new high torque starter,new windshield and much more.The interior(headliner,carpet,seats,door panels) is completely new.The original radio has been converted to AM-FM stereo with custom kick panel speakers and rear mounted remote CD changer at a cost of over $1000.This car runs and drives as nice as it looks with no shakes rattles or problems of any kind.It comes with the Pontiac Historical documents showing it to be an original GTO with as stated options.This car needs no repairs and everything works except the clock. Call for more info 407 814 0624   Dave