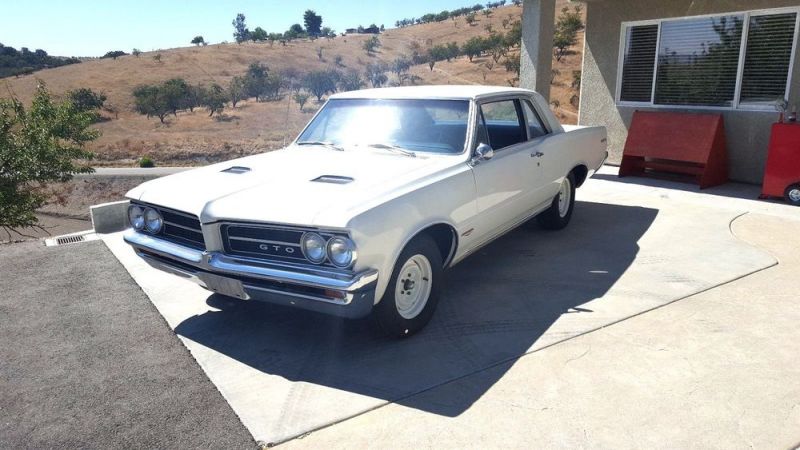 If you have any questions feel free to email me at: lorialhhopper@2babe.com .

PHS (Pontiac Historical Society) Documented
VIN: 824F32621
In the past this Muscle Car was represented as being a Royal Bobcat. I can find no documentation to support this
claim. It does have the lighter springs in the distributor but I have not torn the engine down to verify the
aluminum lock nuts on the rockers or the offset key in the cam.. I also do not know what jets are in the carbs. If
this was a true Royal Bobcat the intake gasket would have the water passages blocked which I cannot confirm. The
Royal Bobcat gaskets were in the trunk of the car along with the Royal Bobcat air cleaners.
With all that stated, It might be a Royal Bobcat or it might not. I am selling it as NOT a Royal Bobcat. If the
buyer can document the car as a Bobcat, he will have made a great buy.
This is an excellent example of a surviving Muscle Car. A 100% rust free, never hit or damaged car built in
Fremont, CA, and delivered to Bryant Pontiac in Covina, CA. The car was in California until it was purchased by a
military man stationed in L.A. in 1973. He took the car to his family home in Detroit Michigan. From 1973 to 1983
the car was a summer cruiser on WoodWard Avenue in Detroit and accumulated only a few thousand miles during the
summer months that decade. It was then put into storage until it was purchased by the previous owner in 2006. At
that time a complete restoration was performed. It is a 100% rust free and never hit or damaged survivor.
The care has its original #'s matching 389ci 348 hp 3x2 Tripower code 76XW block which appears to have been rebuilt
at some point.
The car retains it's original Muncie 4-speed and Hurst shifter. The rear end gears are 4.33 PosiTraction which
were installed in place of the original 3.23 factory gears possibly by Royal Pontiac. The original 3.23 gears go
with the sale.
The car was ordered with A/C however it was removed years ago possibly by Royal Pontiac and is now a non A/C
configuration. It has power steering, drum brakes, bucket seats with console, and am radio.
The car received a total restoration at some point with fresh paint, new chrome on the bumpers, and stainless steel
trim polished. New interior including dash, sills, dash pad, door handles, window cranks, front and rear seat
covers, carpet, headliner, and package tray.
The car received all new weather stripping and window seals. Redone and detailed trunk.
New vintage Sun Tach and mechanical gauges.
Everything under the hood has been replaced, restored, or rebuilt.
New 2 1/2" Pypes, mandrel bent exhaust, upper control arm bushings, new tires, brakes, and recored radiator.
The Royal Bobcat air cleaners are included in the sale as well as the original 3.23 gears.