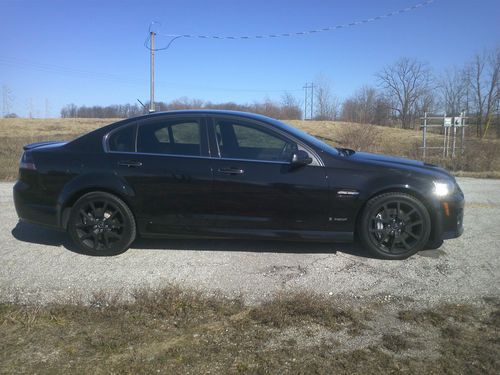 This Pontiac G8 GXP is in great condition inside and out.  It features the powerful 6.2l V8 engine with 415 horses.  The Pontiac brand only installed this engine in the G8 GXP, and only in 2009.  This is the most powerful production Pontiac ever built.  Only around 1800 GXP's were built, and of those only around 300 with the manual transmission.  This car has never been smoked in, and also includes weathertech mats for front, rear and trunk.  (Factory GXP mats included too) I purchased this vehicle last year used from Baltimore Maryland.  All four tires are new and have less than 1000 miles on them.  I just had the rear differential fluid changed and clutch fluid flushed by the dealer less than 1000 miles ago.  The wheels are factory, however they have been powdercoated matte black by AWRS wheel.  They are excellent, with no scratches or nicks in them.  I am also including the factory service manuals printed by Helms. There are four large books.  I am selling because I am a federal employee about to be furloughed due to the Sequestration, and this is an extra vehicle that we don't need given the reduction in pay.  KBB private party is $30,125.  I am starting the auction at $26,700 with no reserve.  I will also list this car elsewhere and if it sells before auction close I reserve the right to close this auction early.  Test drives welcome, call or text "tree 1 sevun tree tree 2 niner sevun 1 ate" (to keep the bots away)  More pictures on request.