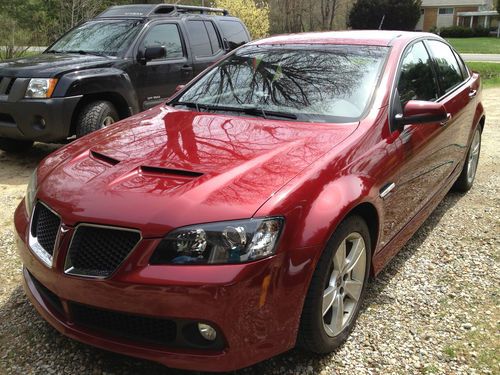 Great car that has been a fantastic vehicle and pleasure to drive and own. It has newer Continental Extreme Contact DW tires that were only used for last summer and I have a set of Blizzak winter tires( tires only no rims) that will go with the car if you want them. Car runs and performs excellent. I'm selling this and another car to make room for a new car otherwise I'd keep it because it been an all around great car for our family. I have more pictures and can answer any questions you have about the car. The car has never been in an accident and is great shape . The 6.0 ltr V8 has plenty of power and easily outperforms our 2001 Mustang (which is supercharged) and the 6spd Automatic transmission with sport shift lets you cruise around or direct the car when you want to shift if you want that more manual approach.   The car has a standard cloth interior which is in great condition the car has onstar service available and includes an indash 6 disc CD changer with large display.  We bought the car new and our family has loved it and I hate to see it go but we want to sell this and our Mustang to make room for a new car.  Again, please let me know if you have any questions or pictures since I'm limited to 4.  The only item that is not stock is a drop-in K&N air filter.  This car has been my daily driver and the first 30k miles were exclusively highway miles during a long commute I was making and the rest have been mostly country roads and highway since.

Shipping, Payment, Warranty (you know all those other fine details)
Car will be for pickup only.  If someone is coming from out of state I can meet you in Grand Rapids MI at the airport.
I will require a $500 deposit within 48 hours of winning the auction
The car is sold as is, there is no warranty or extended warranty that is transferable to the next owner.