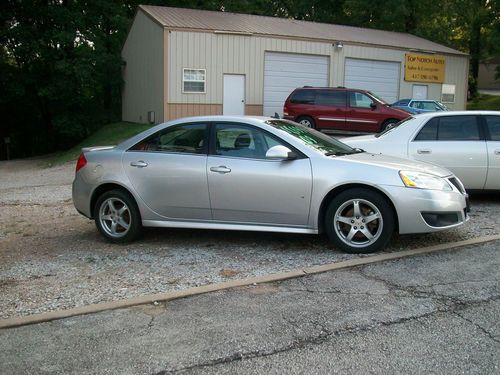 Condition: UsedA vehicle is considered used if it has been registered and issued a title. Used vehicles have had at least one previous owner. The condition of the exterior, interior and engine can vary depending on the vehicle's history. See the seller's listing for full details and description of any imperfections.Seller Notes:"Like new condition. No major defects inside or out. No lights on dash. Good tires. Needs nothing but a new owner. Price includes 3 month warranty."

This is a gorgeous silver 2009 G6 GT that has been well taken care of.  It is loaded up with power everything, CD Player that has auxillary input for your MP3 player, Remote Start for those hot days when you want it to be nice and cool before you get into it, It's FLEX FUEL too, so it will save you a bundle at the pump!  There are no disappointments here because this car is in nearly new condition inside, outside, and mechanically!.  Plus I'm throwing in a 3 month warranty at this price and it qualifies for up to 4 years worth of warranty if the buyer chooses.  Bank financing is available as well.  Call Rich for more details at 417-598-0798.

I am willing to deliver up to 100 miles for $1 a one way mile.  There is an airport here in Branson Missouri where I can pick up out of town buyers.