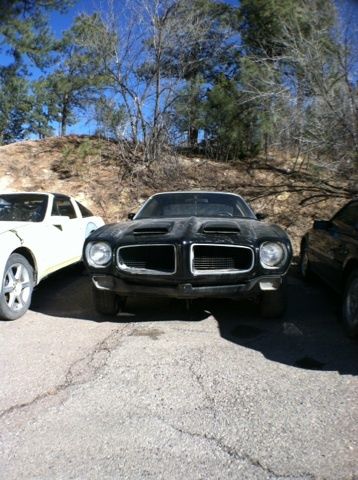 Up for grabs is a 1970 Formula 400 Firebird, has a 400ci engine, and a 4speed tranny. The engine is at machine shop and i have all parts for car. Also have spare body panels for car front clip ect. I have extra wheels for the car too. Car is in good shape has some surface rust needs paint it does need work.

Engine has been built previously, I am a ex machanic for ford and I can tell you every detail the car has been though since I bought the car back in 1983. Has been in my family since new, millage is 11,000 car shows more but it was last registred in 1974 before i  aquired the car.

Car is for sale locally and if you have a price in mind call and i will be willing to work with you.

Price is OBO, ALL REASONABLE OFFERS WILL BE ACCEPTED!

FOR ALL FERTHER INFORMATION ON THE CAR PLEASE DONT HESITATE TO CALL.
PLEASE CONTACT Terry AT 575-9 THREE 7-0483

Car is listed locally, so i do reserve the right to end auction early unless you call and make me a better deal!