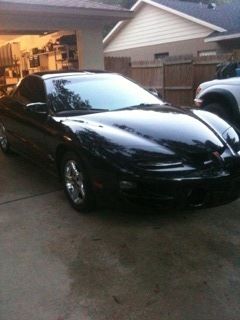 1998 Pontiac Trans Am with almost 96K miles. It has a Yank 3600ss stahl converter, hooker jet hot long tube headers, 3 inch qtp cut out, and a SLP lid. This Trans Am also has tubular BMR lower control arms and pan hard bar and boxed BMR sub frame connectors. It has new spark plugs, A/C compressor, accumulator, and a racetronix fuel pump. Car has always been garage kept and meticulously maintained. I bought the car while I was a technician at McNamara Pontiac in Orlando.

Car does not have cats. it has an off road y-pipe with rear O2 simulators. It also has an LS6 intake with no egr port. The egr valve and air pump have been removed, however I still have the original intake and egr assembly that i will throw in. I also have a set of OEM 17inch polished aluminum WS6 wheels with no tires. I will put the wheels in the deal as well.  Lastly I have 2 stock monsoon head units. I have the tape deck so that an ipod/mp3 cassette can be used, as well as a separate CD/AM-FM head unit.