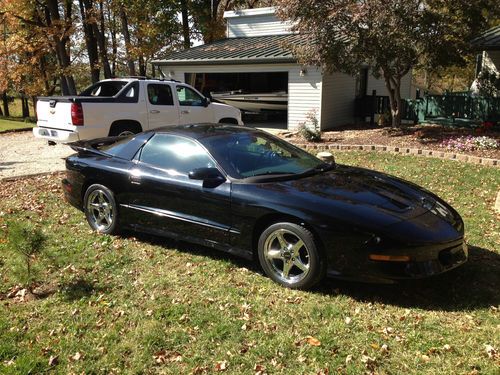 THIS CAR HAS A LOT OF HIGH DOLLAR HIGH PERFORMANCE ADD ONS, HERES A LIST,58MM THROTTLE BODY, 30# INJECTORS, GRANETELLI MAF, MEZ ELECTRIC WATER PUMP(LESS THAN 2 MONTHS OLD, UNDERDRIVE PULLYS, ALUM DRIVESHAFT, EXHAUST CUTOUT, BTE 3600 STALL, TH350 TRANNY WITHTCI TRANSBRAKE, B&M PRO RATCHET SHIFTER, 12 BOLT MOSER WITH SPOOL,CAR HAS 411 RICHMOND GEARS IN IT, AND AN EXTRA 488 RICHMONDS THAT GOES WITH IT, IMPROVED MAC TORQUE ARM, DYNATECH HEADERS, CUSTOM Y PIPE, XE230/236 CAM, 1.6RR'S, PORTED HEADS, MSD 6 D+, ACCEL COIL, LINE LOCK, DRAG SPRINGS, KYB ADJ STRUTS, CE SHOCKS, LAKEWOOD LCA'S, ELECTRIC SHIFTER, CROSSOVER DELAY BOX, HAS 2 SETS OF FACTORY CHROME REAR WHEELS ONE HAS A SET OF HOOSIER SLICKS THAT NO MORE THAN 30 RUNS ON THEM, AND ONE SET THAT HAS BRAND NEW MICKEY THOMPSON DRAG RADIALS STREET LEGAL ON THEM. AIR COND WORKS PERFECT, 68K ORIGINAL MILES ON CAR, POWER WINDOWS,POWER LOCKS(NEEDS ACUATERS), POWER ANTENNA THAT WORKS WHEN YOU TURN THE STEREO ON, CRUISE CONTROL WORKS, CAR IS VERY TIGHT AND DRIVES GREAT AND VERY STREETABLE. CAR RUNS 7.60'S WITH 488 GEAR AND SLICKS. HAS NEVER HAD NITROUS HOOKED UP TO IT. THE DELAY BOX CAN BE REMOVED VERY EASILY. HAS A ELDEBROCK 2 IN 2 OUT PERFORMANCE MUFFLER , SOUND VERY GOOD, OR YOU CAN UNCAP THE HEADERS AT THE RACE TRACK. TRANSMISSION HAS JUST BEEN REBUILT IN THE LAST YEAR AND HAS NO MORE THAN 30 PASSES ON IT.THE CAR IS VERY STRAIGHT AND DOES'NT HAVE ANY RUST AT ALL NO WHERE ON IT. I AM SELLING BECAUSE I HARDLEY EVER DRIVE THE CAR AND HAVE PICKED UP FISHING AND HUNTING AS A HOBBY. THIS IS A VERY NICE CAR AND HAS'NT HAD ANY SHORT CUTS AT ALL DONE ON IT. ALSO THE BATTERY IS LOCATED IN THE TRUNK. THE HEAD LINER NEEDS TO BE REPLACED, WAS SAGGING BAD SO I REMOVED IT AND HAVE'NT GOT A CHANCE TO PUT A NEW ONE IN. IF YOU HAVE ANY QUESTIONS FEEL FREE TO CALL ME AT 812-480-8141, MY NAME IS RANDY.