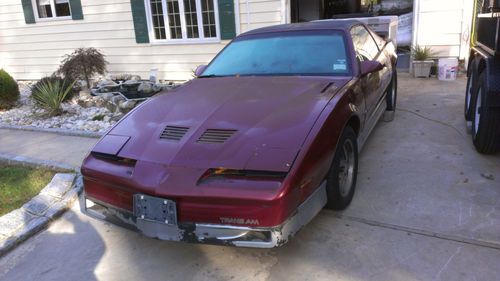 Condition: UsedA vehicle is considered used if it has been registered and issued a title. Used vehicles have had at least one previous owner. The condition of the exterior, interior and engine can vary depending on the vehicle's history. See the seller's listing for full details and description of any imperfections.Seller Notes:"1987 PONTIAC TRANS AM MAROON,GRAY BOTTOM,GRAY INTERIOR,UNDER HOOD SUPER CLEAN,DRIVERS SIDE SEAT NEEDS REUPHOLSTERING,CARBURETOR NEEDS TO BE REBULT,AND PAINT WORK,THE CAR DOES NOT SMOKE AND RUNS GREAT,DRIVE LINE STRONG, NO RUST OR ROT,NEEDS PAINT WORK ,ONE OF THE HIDE AWAY HEAD LIGHTS DOES NOT OPEN ALL THE WAY, GREAT CAR FOR A PERSON WHO IS HANDY,THIS CAR IS 26 YEARS OLD,IT IS ONLY GOING TO GO UP IN VALUE,THE PRICE IS 2,500 FIRM ,THIS IS A FAIR PRICE FOR THE LAST OF ITS KIND VEHICLES."

1987 PONTIAC TRANS AM ,5 SPEED,T TOPS,ALL POWER,96,990 ORIGINAL MILES ,THIS WAS MY BROTHERS CAR,HE WAS THE SECOND OWNER,IT HAS BEEN GARAGED FOR MANY YEARS SINCE HE OWNED IT IN THE EARLY NINTIES,WAS ON THE ROAD FOR ABOUT 1 SUMMER OF 2013,INSPECTION IS FROM APRIL OF 2013, COLORS MAROON WITH GRAY INTERIOR,CARS DRIVE LINE IS STRONG,RUNS WELL ,DOES NOT SMOKE,NO ROT OR RUST,AND IS ALL ORIGINAL,THIS CAR IS GREAT FOR A PERSON WHO HAS THE TIME FOR TLC,THANK YOU.