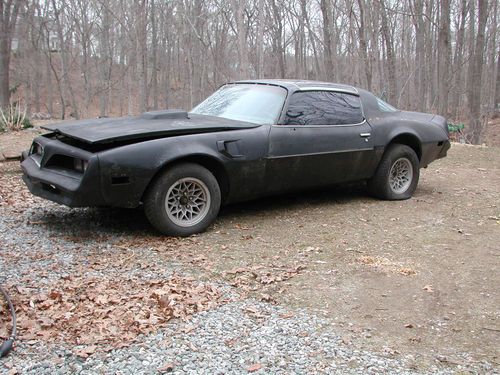 Hello you are bidding on a used 1978 Pontiac Trans Am T-TOP WS4 fisher. This car has a running 400ci motor. The motor runs good but needs to be tuned, It has an edelbrock aluminum intake and carb 750cfm. the motor is believed to be stock but not sure on that one. The automatic tran seems to be good and believed to have a shift kit.I bought this car a month ago with the intention of fixing it up but The BAD: This car need a full restoration. The passenger side first the floor needs to be replaced with a front half panel. the rear frame rail need to be partial replaced took a pic of it. the drivers side the floor where it meets the rocker needs attention rear frame rail looks ok. The trunk needs a patch above the frame see pic. rest of the trunk floor is solid. the inner rear wheel wells need attention. The real Bad someone did some body work to this car that needs to be undone!!!! The new rear quarters were installed over the old ones so they must be removed carefully and reinstalled correctly I dont believe they were forced to fit or altered too much, Same with the pass outer rocker must be removed and reinstalled correctly. The air conditioner parts are missing. Thanks for looking. Ask questions I will answer them the best I can. Bid high and often. I will have no part of shipping the car.