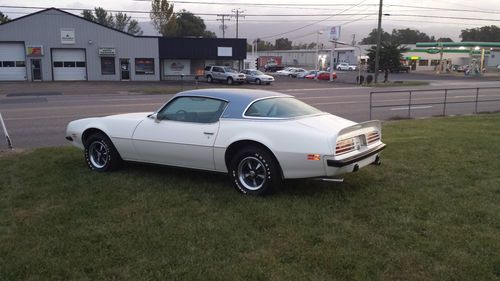 WHAT WE HAVE HERE IS A NICE 1975 FIREBIRD ESPRIT  CAR HAS A 350 PONATIC ENGINE AUTOMATIC TRANS CAR RUNS AND DRIVES EXCELLENT HAS NEWER DUAL EXHAYST PONATIC RALLEY WHEELS WITH LIKE NEW HOOSIER RADIAL TIRES. THE FLOORBOARDS AND TRUNK ARE IN EXCELLENT SHAPE BODY LOOKS NICE HAS HAD A REPAINT ABOUT 8YEARS AGO  DOES HAVE A COUPLE BLIMMISHES BUT OVERALL CAR IS VERY PRESENTABLE.I HAVE DESCRIBED CAR AS BEST AS I CAN AS WAS TOLD TO ME I TOOK CAR ON TRADE CAR DRIVES OUT EXCELLENT WOULD NOT BE AFRAID TO GET IN AND GO ANYWARE. THAT BEING SAID CAR IS BEING SOLD AS IS WERE IS NO WARRANTY EXPRESSED OR IMPLIED ARE BIDDING TO BUY NOT COME AND DISCUSS PRICE AFTER BIDDING HAS ENDED. ARE MORE THAN WELCOME TO COME AND LOOK AT WHILE AUCTION IS RUNNING WILL ANWSER ANY AND ALL QUESTIONS AS SOON AS POSSABLE. THANKS AND GOOD LUCK.