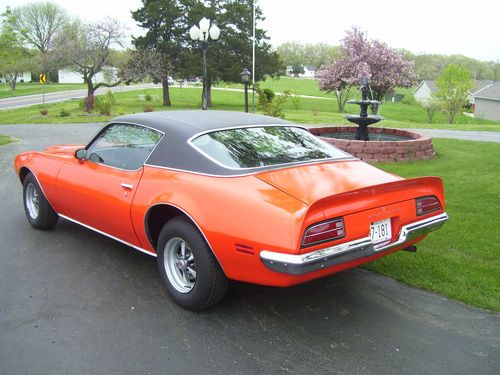 I HAVE FOR SALE A 1973 PONTIAC  FIREBIRD. THIS CAR HAS NEW PAINT, NEW CARPET, NEW SEAT COVERS, NEW HEADLINER,NEW SILL PLATES. IT ALSO HAS ORIGINAL DOOR PANELS IN EXCELLENT CONDITION. IT HAS ALL NEW DOOR AND WINDOW RUBBERS . WINDSHIELD AND REAR GLASS WAS REMOVED AND NEW BLACK VINYL TOP WAS INSTALLED AND WINDSIELD WAS REPLACED WITH A NEW ONE. HEATER CORE WAS REPLACED.  ALSO HAS NEW AIR COMPRESSOR AND AC HOSES. ALSO HAS NEW CONTROL ARM BUSHINGS AND NEW UPPER BALL JOINTS. REAR BUMPER WAS REPLACED WITH A NEW ONE. THIS CAR HAS ALL ORIGINAL BODY PANELS. NO RUST IN FLOORS OR TRUNK AREA. ALL GAUGES, LIGHTS, HORN, AND TURN SIGNALS WORK. IT RUNS AND SHIFTS  GOOD. LOW RESERVE!!!