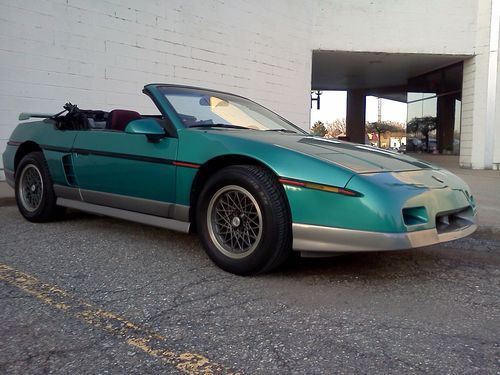 Car is in top shape - no rust under at all. Motor has been rebuilt ( yes Paperwork ) to a 3.2 - balanced as well. Oil change every 2500 and has only used - since rebuild - Mobil 1 full syn. This car has never seen snow or hardly any rain. Don't get me wrong I drive it every chance I get - I would not hesitate to drive any where in the US - in fact I could even drive (deliver) to where-ever the new owner is - Delivery is totally up to the buyer - the cost or method is not included. I have never used the A/C so does it work? - I have never cared as it is a convertible after all. Car has been seen on the Woodward Dream Cruise and defiantly turns heads. Stereo is factory not THE original but looks new and sounds great.  I did have to replace the converter with a test pipe, to well, test the engine of course. I replaced the starter this spring as it was acting funny. The battery has been moved to the front on the passenger side in front of the wheel. Brakes are all like new. Tires have great tread.

The top does work - isn't the prettiest but is functional - ya it needs replaced - boat top maker here told me 350.00 to make new top. So either it can be replaced before delivery or you can have it done after or just drive it in the sun always like I do - your choice. Last summer I had removed the top completely so it never seen rain in 2012. The seats are comfortable foam is in great shape - some critter ate the coverings only. I have access to good seats with speakers but as I am a smoker I have not bothered to change - can either include seats or change them if requested - I figured why risk hurting some really nice seats, told myself when I quit I will change them. Both headlights have been upgraded to metal gears so they should not fail. I am sure I am forgetting something..... Slave cylinder was changed in spring 2012. New Deka battery in summer 2012 New rear brake lines (all) early spring 2013. and emergency brake does not work neither does the passenger side power mirror. I am the only driver so I have never needed to move it. Air intake area has been modified (see pics) and both sides are the same look to keep the car looking balanced. Wood trim is not real wood but was made for Fiero's.
If you have any questions please do not hesitate to ask. I do have the ability to show the car live on the web. So if there is something specific you would like to see send me a message, I will be glad to set up a time and give you the address so you can see and hear for yourself or Skype if you are already member.
There is no warranty expressed or implied, blah blah blah.....
I reserve the right to end the auction if agreed upon price is met locally or distant with personal delivery option.
Payment - Non-refundable deposit of $1000.00 (us) within 24 hours of auction end full payment within 7 days or deposit forfeited.
If reserve is not met WE will look at the closest bid carefully.
I am selling to keep the piece - the car is worth more to me than I could ever hope to get - but to the wife it is -- well for sale.........  And we all know a happy Wife is a Happy Life.