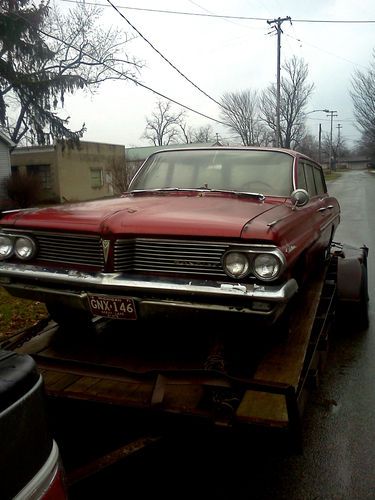 I have noticed the car for many years of my adult life sitting in the back of an old garage which started to fall apart.  The Grandson of the driver pulled the car out of the garage to remodel and put siding on the garage.  I pulled over and asked him about the car - and he stated he wasn't interested in the car.  The following weekend he flat-bedded the Catalina, our daughter calls her Catty, to the house.

After many weekends of tinkering and washing her up, I have decided to move on to other 'summer' projects.  I no longer have time and need the space in my garage.

The motor is freed up and has spark, but does not run.  The fuel system is not yet cleaned.

The body has minor rust, all the glass is solid, frame is solid,  floor boards solid, interior is good. This car has been parked for 42 years in a barn/garage. The back tailgate is the only part of car with major rust.  There are no dents.  Even the tires are original.  Only has 33,000 original miles and the condition (under the dust) shows it.

I really hate to see this one go... I felt like it I was going to get her back on the road ... but I have some Firebirds that need my attention.