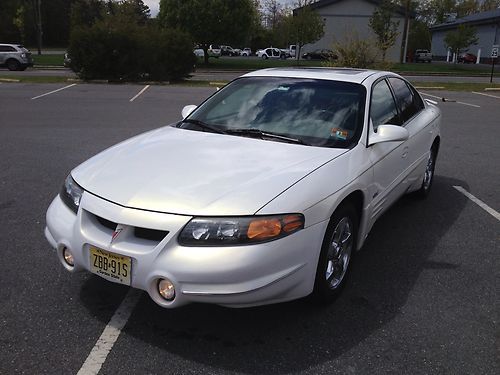 Excellent 2004 Pontiac Bonneville SLE with only 68k miles on it. It is white with a bronze hue in the sunlight, tan leather interior with heated seats, sunroof, all powers and A/C. I just spent 1400.00 for new hub bearings, new rotors, 4 wheel alignment and brand new firestone 70k mile tires. It was just inspected both by the state and dealer. No leaks, trans shifts smooth, fluid is pink and it gets 29 mpg on the highway. Car was just inspected and also checked out by a local GM dealer. It is mechanically sound. The only issue I found is the speedo/tach sometimes gets hung up. This is an easy fix that would cost 250.00 to rebuild the cluster. I have not done it yet only because I have not had the time. I adjusted the price accordingly.

This is a great first car or commuter car. I originally bought it for my son who was going to be going away to college but he wound up selecting a college near by. He wants to keep his Grand Prix with 170k on it. I am not pressed to sell the car. I really like it and have been driving it to work on occasion. I drive 55 miles one way and it is very quite and comfortable. So please no low ball offers. KBB lists it at 8400.00 as it sits for private sale.

UPDATE: not sure why the auto check isn't showing the cars history. I included a picture of the car fax. I also have full copy in hand.