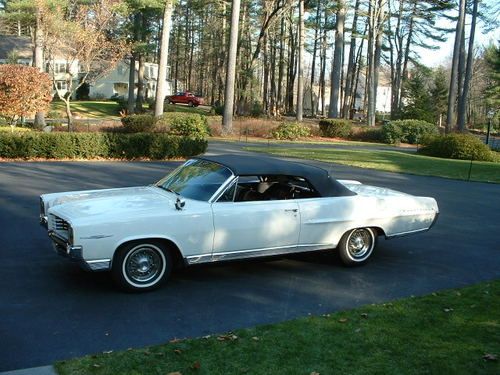 Condition: UsedA vehicle is considered used if it has been registered and issued a title. Used vehicles have had at least one previous owner. The condition of the exterior, interior and engine can vary depending on the vehicle's history. See the seller's listing for full details and description of any imperfections.Seller Notes:"AC doesn't work"

A seldom seen and highly optioned 1964 wide tracking Pontiac Bonneville Convertible with factory A/C, 8 lug wheels, power steering, brakes, top and antenna. AM/FM radio with rear speaker. The radio was rebuilt for better performance while keeping the original face. Also notice in the photos that the radial tires are the correct size with the proper whitewall width. Infamous Pontiac Motor Division 389 4 barrel with 303HP that runs perfect. Immaculate condition inside and out. Purchased in Florida 5 years ago and has since been kept in a climate controlled garage. I am listing this vehicle for the owner. Please call him with any questions or to make a serious offer. His name is Gerry and his phone # is 603-345-2410. Please do not email me with any questions as I will not be able to answer them. The owner adds, "the car is in excellent condition and can be classified as a 2+ condition vehicle as can be seen in the photos. I enjoy driving a car that not only looks good but also runs well with comfort and reliability. Whatever work that was needed to be done to ensure safe and trouble free operation was performed. The car is a very high quality driver that if seen and inspected would not disappoint."