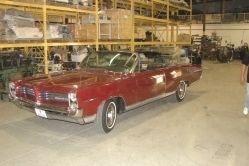 1964 Bonneville Convertible, 6-Pack engine 389, triple carb, 2+2, 81,000 original miles, matching numbers, many extra parts ( we had two identical cars, one was sold minus several parts options), chrome is original and looks great.The white convertible top still looks excellent. Car has spent the majority of its life inside our work shop and away from the elements. Though it is driven occasionally and maintained to keep things running well.Obviously after 49 years cars start to show some wear, but the frame is solid and paint looks excellent. Clean interior, maintained by a car collector. Has many options and features that were available by special order at the time of purchase, and is too much too list. We have two sets of original wheels for the car, the set that is on it now are included. But there is another set of 8-lug wheels that were somewhat of a rarity at the time.They can be purchased along with the car at a negotiated price.There are several extra items that come with the car for no additional cost, some for maintenance, some replacement parts, wheel spinners, car also includes all original owners books.  For more information or to hear the list of extra items that are included and available, please contact Fred at 610-505-3110. The pictures do not show how great this car is so I encourage inquiring and a test drive. Thanks.