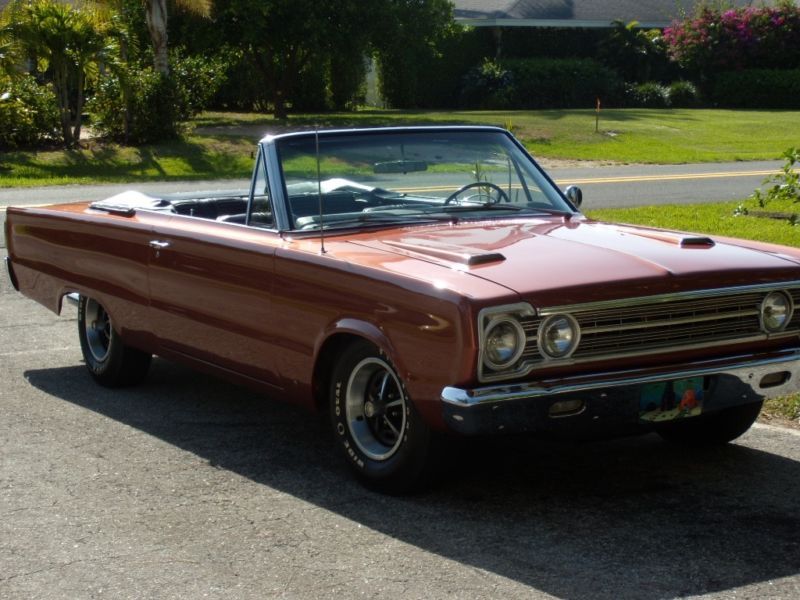 This has been my fun,restored and modified cruising around town and car show car . The only problem is my wife
hates driving with me since the car is so loud. Now that it is summer, she suggested nicely that we sell it and
buy a " quieter" old convertible so that is what we did.
1967 Plymouth Satellite convertible, looks just like a GTX convertible. It has a 440 v8, dual quad carbs, rebuilt
engine with racing cam and tons of upgrades ( look at engine photos to see everything is redone ) , rebuilt
automatic transmission with a stall converter and shift kit, power steering, power brakes, power windows and power
top. All redone and all work well. Everything works but the clock ( typical of old cars and who really cares ).
Reproduction Firestone Wide Oval tires, recent paint respray over original faded copper. Original color to the car
and an original 1967 Plymouth color. Car was from Texas when I got it and has been in Florida since.
Solid - look at the trunk and underside photos. Not a patched rust bucket. Flow through dual exhausts, new
brakes, many new chrome parts such as front and rear bumpers, trim bits, plus a new interior and new top and new
top motors etc..
Driven around town to cruise-ins, car shows and short drives with the car club. Always starts right up and runs
very strong. This is a very loud and very fast car. You can smoke the tires at a traffic light if you are not
careful.
It is however a 50 year old car so it is sold without a warranty and sold as is, where is. I do not want anything
at all in trade. No condo's, no timeshares, no vans, cars or bikes. Nothing.