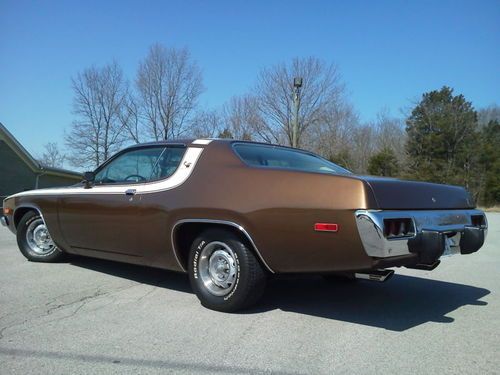 This is one of those Original Paint Survivors that is in Amazing Condition and Runs like new. It has Console and Buckets, Interior Decor Package, AM/FM Radio, Rear Speaker, Duel painted mirrors, Wheel lip mouldings. The Original Hoses and brakes are still on this car, I did change the belts but have the Originals in the Trunk. She has power Disc Brakes and 11" Rear Drums with both sway bars and S13 heavy duty Suspension, They are only Original once and this one has the Mint original Broadcast Sheet and Data Plate. Everything works Perfectly and all numbers Match, see Pictures and call if you like at 207-402-5939 and I will answer any Questions. They made under 10'000 Road Runners in 74 and this isn't a Dart or Duster, One Drive will surely get you Smiling. Good Luck and happy Bidding!