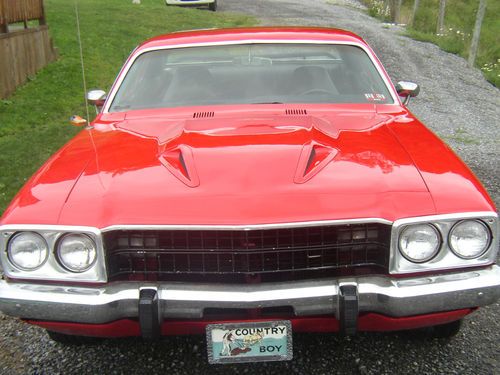 Condition: UsedA vehicle is considered used if it has been registered and issued a title. Used vehicles have had at least one previous owner. The condition of the exterior, interior and engine can vary depending on the vehicle's history. See the seller's listing for full details and description of any imperfections.Seller Notes:"recent repaint on out side car has original paint under hood floors and trunk is solid no replacement sheet meatal. bumpers could be recromed ,inteior like new carpet is some what faded and dash has some cracks mileage not sure"

This car belonged to a man that took it to car shows as a orginial road runner he painted it when he could aford it and the body should have been preped better but it does shine good stripes was never repleced he had to leave to work out of state and sold it, it is a big block 400 car now has a 383 with electronic.int with headers, dual line 4 barrel carb ,i was told eng was a fresh  rebuild it starte good runs strong i had trans. gasket and oil pan guakets replaced  still have some drips from power steering and speedo cables car drives great no shakes  or shimmes it is loud with flowmaster and headers gas guage works but will show half when full brakes are new and stops good but vacum is low at idle makes them harder.i have some extra parts rubber for trunk sound deading for floor extra radiator i half two sets of wheels and  tires the ones on it is keastone with b f g tires the others  are aluminum with larger tires both look great and are excellent shape buyer can have choice, car has new air shocks larger tires look  best with a little air in them all lights work and i have some extra chrome for grill. call with eny quesions 304 660 7773.