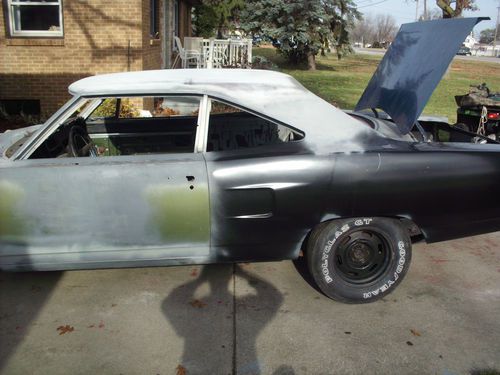 This is a true six pack car  have fender tag door tag  build sheet core support matches with clear title. Car has had sheet metal work floors trunk quarters frames rails needs basic body work.Do not have original 440 have 72  motor with transmission car is automatic with buckets.   Most all parts for car in boxes minus windshield one door glass  and  radiator vary solid car .  Have new interior  from legendary minus dash pad for car one new  bumper also for car .   Car is a dark green the interior i have new is black  also have original carbs and air cleaner for car plus new intake new for carbs  .Have all the chrome in boxes of parts for car not shown car is a bucket car fenders hood is off all solid one fender has some dents but solid just took  seats front and  back  to have covers and foam  put on them  professional done bye general top trim of saginaw michigan happy bidding    john   989-284-4621   no trades            1-31-13 picked seats up today vary nice job on them put photo up of them todaycould not put bottom  rear seat in hit max for photo limit  also have on ebay  mopar rare duel cable transmission see other stuff i have for sale