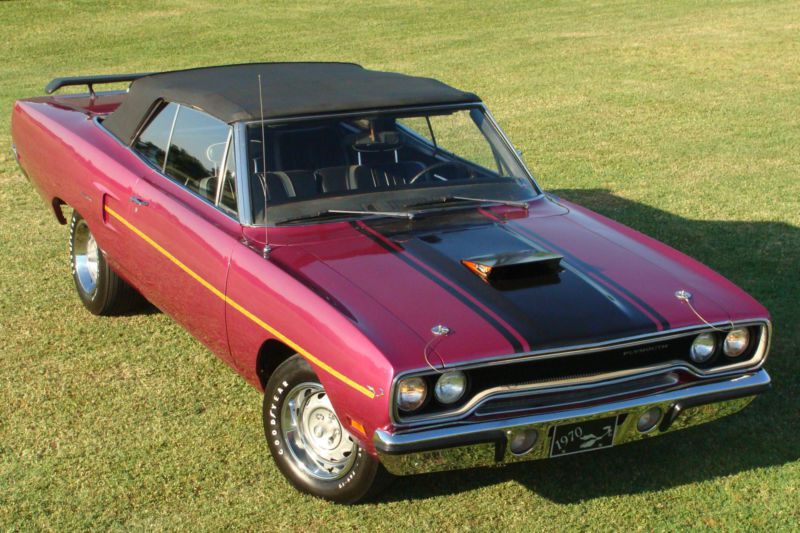 1970 ROAD RUNNER CONVERTIBLE
According to Chryslers own records there were only Six 1970 Road Runner Convertibles shipped in the color of FM3
Moulon Rouge (As Plymouth referred to the color). Most everyone refers to the color by the Dodge name: Panther
Pink! According to those same Chrysler records there were no 1970 Coronet R/T Convertibles shipped in FM3 Panther
Pink.
Of those Six '70 Road Runner Convertibles shipped in FM3 Pink there are only two known to exist today!
With the Road Runner and the Coronet R/T being the only two High Performance B-Body Convertibles offered from
Chrysler in 1970, this of course means that the car you have an opportunity to purchase right here and now is one
of only two High Performance B-Body Convertibles that remain today to have come from the factory in FM3 PINK!
There were only 4 Challenger R/T Convertibles and 3 'Cuda Convertibles shipped with FM3-PINK paint. That means
only 13 total FM3-PINK Hi-Po Convertibles were ever shipped from Chrysler! Only 10 of these cars were big blocks
since the 3 'Cuda Convertibles were 340 cars.
Of the two remaining Pink '70 Road Runner Convertibles I feel this one is the better car because this car came
optioned with the Air Grabber Hood, Hood Stripes and Hood Pins whereas the other one came with none of these
options. Both remaining examples came from the factory with a column shifted automatic. This car was converted to
a 4-speed many years ago.
The original 383 Super Commando engine is no longer with the car, although I do have an HP 383 engine that will go
with it and is perfectly dated for the car. The car is currently running and driving with a 413 and an 18-spline
4-Speed transmission.
I did not get a broadcast sheet with the car nor was I able to find one in the car. As you can tell from the
pictures I've included it has its original fender tag and all of the body numbers match!
The original owner is believed to have been a woman that bought the car new in California. She owned the car for
several years before selling it to the second owner who is the one who put the 413 in it and converted it to a
4-speed. The second owner sold it in or around 1985 to the third owner who had it for over 25 years and is the one
who painted it the color you see on it now. I've had the car since 2010.
The car is pretty solid and has never really had any bad rust issues other than the expected rust in the lower rear
quarters.
The frame rails are in very nice condition as well as the inner fenders. It has had a quarter replaced on the
drivers side but I don't think it was entirely due to rust. I think it had been banged up there at one time
although there are no signs of any previous damage. As you can see in the trunk floor picture it could probably
stand to have the trunk floor replaced due to a pretty crappy patch job."This car is being sold as is"