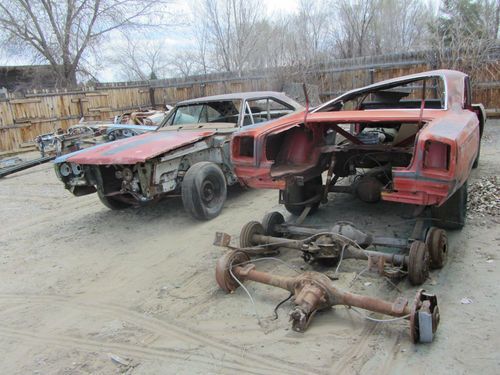 Parts of 6  B body Plymouths for one money.

1969 Roadrunner with all its numbers in place. Red landed on its roof one time and then used for a doner car. It has a rolling 440 1968 model and a 727 tranny with 8-3/4 rearend. Very little rust but as you can see it has its problems. The inside is filled with many useable parts for this or other projects.

1969 Sport Satelite with numbners in three places, enough to title if wanted. It is a sport satellite VIN. It has a rolling 383 and 727 with 9 inch rearend. Inside are many useable parts for this or other projects.

1969 GTX Blue with no numbers. It still has the 440 K member and the inside is loaded down with a ton of useable Mopar parts.

1969 Yellow Charger with no numbers. Front lower frames and cowl with heater and A/C  for a 1970 Coronet. Front frame rails and torque box cross member from a 1968 Satellite.

There is no titles on any of these cars, but the roadrunner or sport satellite can both be titled if a person wanted.

I will help load but pickup and transport is the responsibility of the buyer.