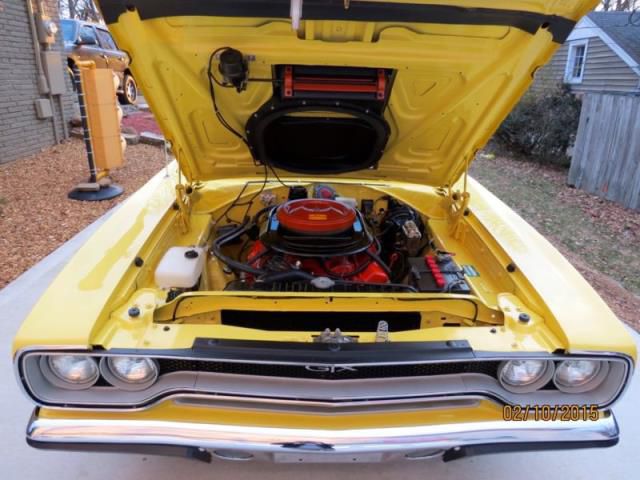 1 of 88 Lemon twist yellow ", A " 1 of 1 " Lemon Twist GTX With - 4 Speed And Bench seat.. Original 39k miles, With an Extensive history going back to 1973 and Build Book with Photos of the Car Prior to the restoration , and other important details, Laminated Original Build Sheet, as well as the Special history of the GTX. - Factory equipped with(Original # matching) Hemi-Box 4-speed Transmission and a Pistol-Grip Hurst shifter and backed with the Original Matching Dana 60 rear-end (Track-Pak) with 3.73 Richmond gear. LIST of factory options are at the bottom of this listing, == The GTX is as it came from the Factory, Other than the Boyd Coddington wheels/Tires , Headers , and Exhaust... Everything else is all Correct. This GTX has been restored to the Highest level and restored to last. Rust inhibitor was sprayed inside the frame rails and each crevice or corner, the car also set sometimes for months during the restoration process so everything could relax and settle, This was not just a Cosmetic Restoration. This GTX was restored with all New or Factory Rebuilt Components so the vehicle is like a brand new vehicle. The vehicle was placed on a Rotisserie Sand-Blasted to Bare Metal and then Coated with PPG Epoxy primer as the base . When finished The GTX is as nice underneath as on top, Underside was buffed and matches top side exactly, This is one of the most intensive restorations with Attention to detail that i have seen.. and will Last a very Long Time.. The vehicle was finished in PPG Concept Line products in a Single-Stage Urethane and the color was matched to be Exactly as the Tone was from the factory. All Black Trim and Suspension components were finished in the Correct Colors and the Correct Degree of Gloss for each item. The body and paint are Flawless and Perfect. All the trim on the vehicle was sent off to Nashville to be redone to perfection including all Pot-Metal items.- The interior has a Rare Geometric cloth insert and is a bench seat up front which was Only offered as an option for the 1970 model. Legendary supplied all the interior including new door panels, handles, screw kit, carpet, seat covers, etc. The interior was installed by a Custom Interior specialist with Over 50 years of Experience. - The engine was built using a .20 bore and new Keith Black pistons for a total of 10.5:1 compression. The original intake, Block, heads etc. and the original air-cleaner remains and the transmission and rear-end are the exact ones that came with this vehicle. The heads were completely rebuilt using the 2.14/1.88 valves and mildly ported and have roller rockers. The cam is a Comp Cams kit with a 284 duration and a .525 lift and sounds like beast while remaining a stock appearance with the headers . The transmission was rebuilt using Brewers Performance kit by a Mopar transmission technician and the Rear end was rebuilt by a differential specialist using all new parts and has a 3.73 gear (original was a 3.54). The plug wires, belts, etc are from year-one and have the correct part number/date codes and all brake lines and fuel lines were replaced using stainless from year-one. The vehicle currently has Boyd Coddington wheels and headers. The rest of the vehicle is as it was from the factory, Original. - ALSO, Each and Every gauge & function on this car works as it did the day it left the dealership. - This vehicle has had all new nuts/bolts installed as each new part went on. The restoration was a " 4 year project ", Over 2,000 hours, and $60k+ in parts alone. This vehicle is of the upmost quality and is for Serious Buyers / Traders Only. - The vehicle was equipped from the factory with the following OPTIONS: ==== - Air-Grabber Hood- Hemi-Box 4-Speed- Pistol-Grip Hurst Shifter- Bench Seat- 14" Wheel Covers- Side stripes - Day Glow- The hood stripes were a dealer performed option- Rally Dash- Dana 60 rear end with 3.54 gears- AM/FM stereo- FY1 Lemon Twist Yellow paint - High Impact Colors were Special Order... ( 1 of 88 - Built this Color )==== HISTORY ================= The history of the vehicle is known since the original owner had vehicle in Indiana and vehicle ended up in Onieda ,TN. in 1972 and was kept in a garage unseen from 1979-2002 and had a little over " 38,000 original miles " when restoration began and now has a little over 39,000. $60,000 Plus in parts alone and does not include the original price of the vehicle nor the more than 2,000 hours spent on the restoration. You will not be disappointed and this is a Great Investment Grade Collector car, this car could very well sky rocket in value overnight, as everyone knows this is frequent thing with Rare Mopars..