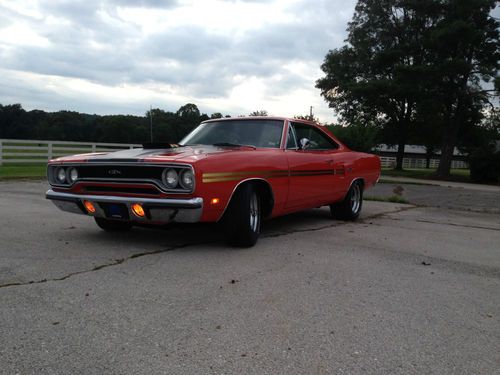 Call with any specific questions and I"ll be happy to talk to you. (417) 753-7071 Russell.  This is a real GTX 4-speed,Air Grabber,Trac-Pak car per fender tag. Tic Toc Tac. California car. Restored by Viva Las Vegas Motors in Vegas in 2011. Since has been re-painted to correct the hood stipe and a few blemishes. Re-chromed bumpers, Legendary covers and carpet. You can pound on this car and it likes it. 18 spline 4 speed with the Dana with 356s in it. Its not a real 6-pak car and its supposed to be Yellow/Gold from the factory but I challenge anyone to distinguish it from a real V code car if you never looked at the VIN. This is a U Code car from the factory. Stockton wheels made to fit those big tires in the back look great. This car flys. Period. Trophys at every car show. Car is a 9.5 out of 10. Near perfect. Come drive it and you'll have to have it. It can be financed through Woodside Credit or JJ Best. I have to sell this car. Divorce.