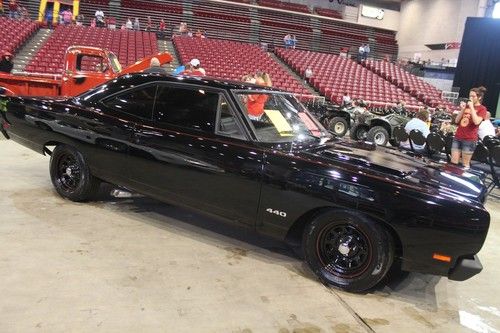 Condition: UsedA vehicle is considered used if it has been registered and issued a title. Used vehicles have had at least one previous owner. The condition of the exterior, interior and engine can vary depending on the vehicle's history. See the seller's listing for full details and description of any imperfections.Seller Notes:"The car has been restored, rebuilt, and is in excellent shape but is missing a few trim pieces, none of which hurt the operation of the vehicle. Ready to drive upon purchase."

Beautiful show quality restored 1969 GTX.  The previous owner had sent this car to a professional restorer where every major body panel was replaced creating a TOTALLY rust free car.

Car was then donated to John 3:16 ministry where our body shop uses the restoration of classic cars to help men over come addiction to drugs and alcohol. We are blessed with residents who have restored cars all there lives and have put their heart and soul into this car. We normally auction these vehicles off at one of our four big fund raisers but have decided to check out other avenues for a couple of our nicer cars.

This car has been painted black on black and a whole new interior including carpet and seats installed in the car. The dash was detailed and blacked out and new gauges installed.

The car has a period correct 1969 440 block which has been bored .040 over and has all new bearings throughout. The motor has new Keith Black flat-top pistons, competition cam, Edelbrock Performer dual-plane intake manifold, OBX Stainless Steel long tube headers, and many chrome accessories under the hood.

All chassis bushings and fittings have been replaced. The car is basically brand new from the ground up. There are a few trim pieces missing that we have not found but the car is unbelievable as it sits.

The car has been built as a resto-mod due to the blacked our chrome on the entire car. New rims and tires all around.

We drive the car 60 plus miles to our last event with no problems.

We have constructed a most unique version of an original GTX which anyone would be proud to own.