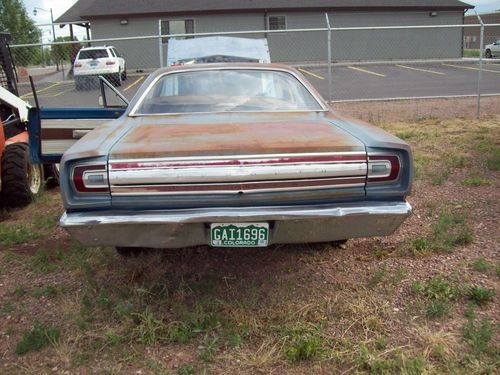 Thanks for looking at this super rare HEMI GTX.  I am helping to sell this car with a friend of mine.  First the car is a running project that has a 440 f code with 727 auto.  The rear end is an 8 3/4 which the auto got from the factory.  This car does need to be restored and I am not giving any warranties or implying any right or wrong info.  I will try to answer the questions a to the best of my ability.  The car does move on its own and will drive up on a trailer.  The car does look to have the original K member and rear end.  I have tried to see if trans is but with out pulling it out I can't tell.  The car has just over 70k original miles and looks like it may have its original paint. The hood says 440 but the guy changed it to that. Fender tag is missing.

So all I would like to say to everyone you are buying a very rare HEMI mopar just over 400 made.  This is a no RESERVE auction and no BS auction.  This is a very cool colored car also.