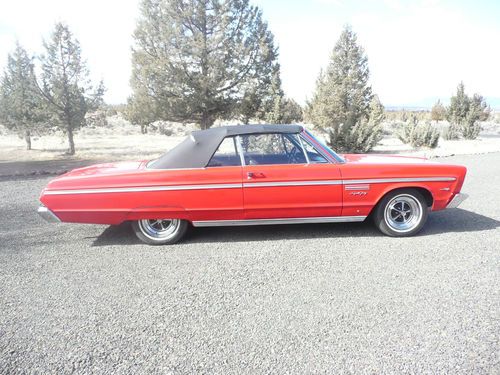 MOPAR lovers...Here is your chance to own a One-Of-A-Kind beautiful 1965 Plymouth Sport Fury Convertible.  This car was built in Canada at the Windsor Plant.  The Windsor Plant did not keep production records for 1965, but Chrysler USA provided me with a copy of their 1965 Plymouth Production Report, which verifies that the Windsor Plant only produced the Fury-1, Fury2, and Fury-3 in 1965, not the Sport Fury.  This car was a Special Order car:  The Sport Fury trim was ordered from the U.S., the large console tachometer, outside sill plates (available in Canada only), and the High Performance 383 cu. inch engine were special ordered in Canada.  It is also equipped with PW, PB, PS, Power Conv. Top, and PAntenna(Rare!).  It also has a CD player under the dash (Original AM/FM radio still in car), and Remote Driver SideView Mirror.  There are less than 75 miles on a complete rebuild of the Original Engine and Transmission.  All Numbers documented correctly to the Original Warranty Booklet!!   Enjoy it as it is, or return it to its original Light Turquoise paint sceme...Your choice.  A complete restoration would sky-rocket the value of this special car.

$2,000 Due 5 days after auction closes.  Balance of sale price due within 10 days after date of close of auction.  Buyer responsible for shipping arrangements and shipping costs.