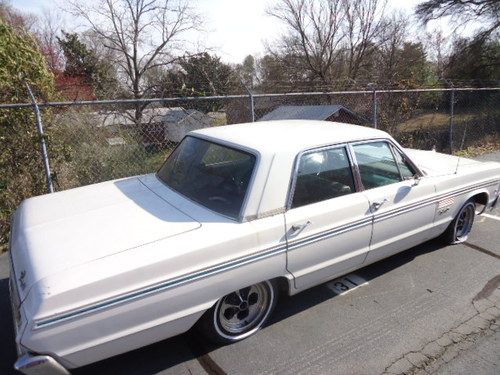 I buy forclosed storage units and I purchased this Nice 1965 Plymouth Fury lll. The car is in very good shape with a good paint job (Not restore grade) however a nice paint job as pictures show. The Body is in very good condition. The engine is missing, but the radiator, fan, oil pan and etc was in the car. I guess is that the previous owner was in the process of installing a new engine or rebuilding the old one. The engine diagram was on the back seat. This is clearly a car that was being driven prior because of the Alpine stereo and the Speaker are mounted in the car. I unloaded many pictures to show the condition of the Fury. I forgot to get the milelage on the car and the engine type I put on the listing was required. However I don't know which specific engine. I will upload the mileage tommorow when I go and retrieve the info. The Storage facility did the title and lean search on the vechicle and I also the police report that ran the info on the vechicle. Any questions I would be happy to answer.