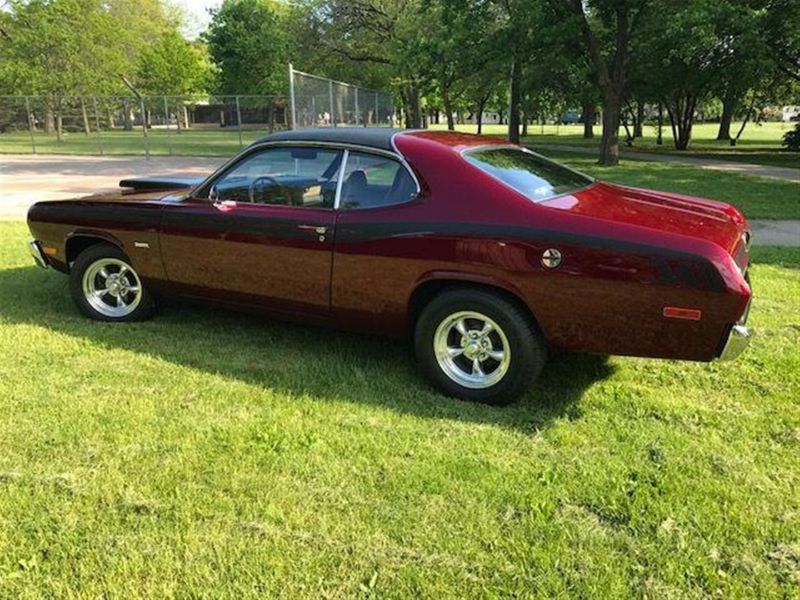 This vehicle has undergone an extensive restoration to what you see. Here is arundown of what was done by a high end shop. It started as a solid car that satin the garage because of a friends untimely death. The car was disassembled andthe restoration began. Any questionable metal was replaced as needed and thebody was painstakingly straightened and primed along with the enginecompartment. Multiple block sandings finished the body arrow straight. Then thebody was refinished in house of color brandy wine candy paint. The enginecompartment door hood and trunk jambs were all refinished and the outer body wascolor sanded and polished to the show finish you see. Original style 340 stripeswere applied in satin black along with refinishing the scoops to match oncecompleted all new weather stripping, soft parts, trim/chrome etc... Wereinstalled along with correct vinyl top.Rarely do you see an original factorysunroof in a Duster, but this one is factory! The interior got full attentionwith all parts being restored to new or better condition. The 340 engine got acomplete performance rebuild with new pistons, reconditioned rods and new bolts,cut/polish crank, and a rebalance new performance cam and valve train was added.The heads received all new valves, springs, hardened seats, etc... thenresurfaced. The engine was built and assembled at a noted Mopar Aloha Automotive. It is topped off with an Edelbrock intake, BarryGrant carb, and MSD ignition. The 727 torqueflite transmission was built withall heavy duty parts and a
My eMail : LorenFlaniganepve@yahoo.com