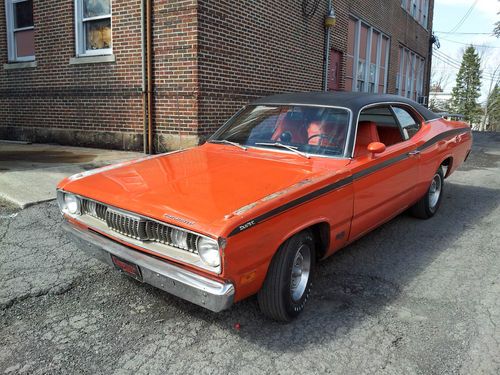 Condition: UsedA vehicle is considered used if it has been registered and issued a title. Used vehicles have had at least one previous owner. The condition of the exterior, interior and engine can vary depending on the vehicle's history. See the seller's listing for full details and description of any imperfections.Seller Notes:"Original Paint in various stages of wear. Dent at LF Headlight on fender, very little rust, other miscellaneous dings and dents.RF fender has some primer to control surface rust. RR Fender is the only body repair I've found. Looks like wheel came off at one time and bent RR fender. Amateur repair but steel is still solid. LH Door has been replaced."

I bought this car out of a barn where it had been retired. The picture with the yellow headlight covers is the way I found it. It is an authentic 340 car with the correct trim plate and clear title. Serial # VS29H1B XXXXXX

As you can see, this is a car that has interesting potential. On one hand, it can remain original in spite of numerous "character marks". For anyone looking to buy the nostalgic car they likely drove when money was tight, this would be an excellent option. ( You'll be the envy of your car club buddies if you rolled up in this vintage Mopar) The paint is reasonably complete in it's original color. The RH fender has some primer sprayed on it to stop surface rust. You can tell it's been there a long time. There are other minor dings and dents.

The right rear fender had damage at one time. If you look up inside the fender, it looks like the metal received a blow that left shock wave ripples in the steel. I figure it lost a wheel.  It's still the original metal but bondo was used to smooth the surface ( not to repair rust) and it was color matched. That's the only place I've found on the car where damage occurred and was concealed. The underbody, rockers, and trunk are in very good shape for this vintage musclecar. Someone pried the trunk open during it's life so the rear panel has some dents. Once again, the original metal wasn't compromised. It's tough to find an original steel Mopar when they had no real rust protection in the early 70's.

Another option would be to simply re-paint the car and do a cosmetic restoration to have a nice rare Plymouth. And finally, it would be a great car to totally restore because of it's pedigree.

All metal is solid,the vinyl top is really nice, and the interior is good. The chrome is OK for a street car, but if you're looking to show the car, you have solid metal to re-plate. The original "Shark Tooth" grille is still on the car. It's cracked in a few places but it would be an easy fix. The wing is new as well as the E70-14 Goodyear Polyglas White letter tires. The original rally wheels with 4" bolt pattern confirms the authentic hubs and rear axles are still on the car. There are some traction bars leftover from it's glory days.

Currently, the car has a 1969 340 engine with "X" heads. I was told they put this in when it did some drag racing in eastern Ohio back in the 70's- 80's. It's tough to beat this vintage 340 because it had the best output of that engine series. There's a Spring National decal in the side window.( I have a 71 340 engine with "J" code heads...see picture, the correct intake with "200" casting number,  the original 71 only Carter 4973S Thermoquad carburetor, 340 dual snorkel air cleaner, correct rocker covers, dated exhaust manifolds, and other engine items that I can make available to the buyer separate from this transaction. Repeat, this is not part of this auction) The engine runs fine. It's been retrofitted with the common 70's performance upgrades ( Holley Carb, Edlebrock Intake,Headers). I put a new starter on it. There aren't any options to speak of. It's the pure muscle car you remember.

The transmission is a four speed with floor shift. The car was originally an automatic column shift.( I have the trans, torque converter, and more, again separate from this sale, but available to the buyer...see picture) The 4 speed conversion was done tastefully. Bucket seats have replaced the original bench. The trim code indicates the interior was Orange. Rare Black and Orange plaid was the color combination indicated.  The interior looks good as it is, or it could easily be returned to stock configuration. The rugs are new. The dash pad has a tach mounted above the shifter. It's not wired currently.

It has a clean spare rim, an original NOS Goodyear Polyglas tire, and the original jack. The only metal repair I've found on the car is a 6"x6" patch in the trunk floor down in the spare tire well.

Because it sat for a while, I put new brake pads on, new front drums, and bled the system. The master cylinder had been replaced. I greased the chassis it when I got it.

There's a lot of cool old literature that came with the car. It's rare old Mopar "Direct Connection" Performance books. The Owners Manual is there also.

This is just a good old car with lot's of potential for about anything you want to put on the road. It will burn rubber as long as you can stand it or the tires blow.

I encourage you to ask questions because although I've tried to cover everything, I want the new owner to know what they are buying. Of course there's no warranty and the sale is final. The car is for sale locally, so it would be a good idea to bid early on this one. If it looks like things are going well, I'll delay any local buyer until the auction ends. Buyers should make all plans within 48 hours to pick the car up and pay a deposit. Cash or Certified funds are preferred for the balance.

This is a great old muscle car in decent shape.