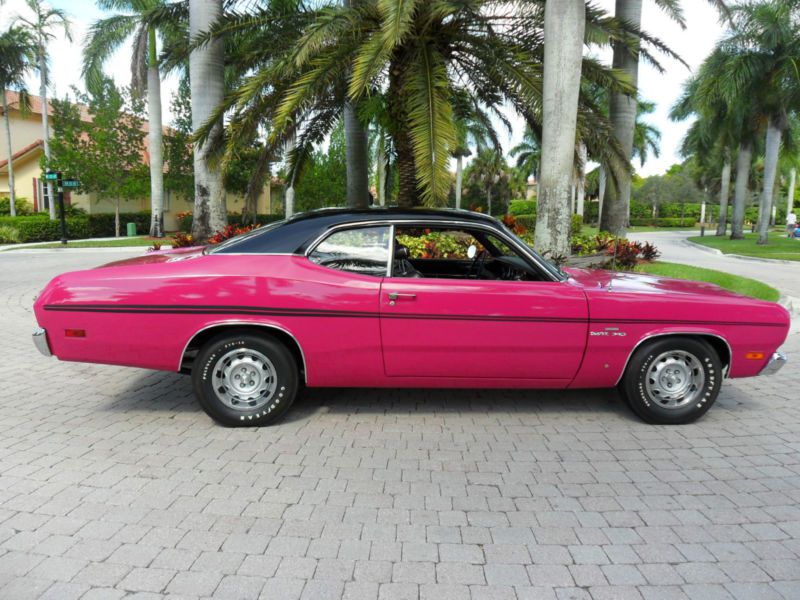 This is the rarest and most important Duster ever produced. One of a kind Duster 340 4 speed, FM3 Moulin Rouge (Panther Pink) with the rare VO2 painted roof option. The car was front page featured with a four page article in Mopar Collectors Guide in 2005. This car was highlighted as one of the only Dusters ever invited to Mopars at Carlisle to the invitational building for one of the best Mopars of 2004. This extremely desirable car is a numbers matching 340 4 speed and fully documented with original fender tag and build sheet. This is a true investment grade vehicle that would be an incredible addition to any high end classic car collection. Plymouth is known to have produced only two pink VO2 340 Dusters in 1970 one automatic with a white roof and one 4 speed with a black roof, this is that car. This special car has been rotisserie restored to its original factory specifications and is presented as it was originally delivered from the assembly line. The car retains its original body panels as well as all the car's correct original mechanical components. When collectors describe a car as rare and desirable this is what they mean. Some of the car's most important factory options include, FM3 Pink body paint, TX9 Black painted roof, 340 CI V-8 engine, 4 speed transmission, 355 sure grip differential, front disc brakes, heavy duty suspension with sway bar, Rally wheels, Black deluxe interior and Rally gauges. Not only is this the rarest of all the Dusters ever produced but also the most striking one you will ever see.