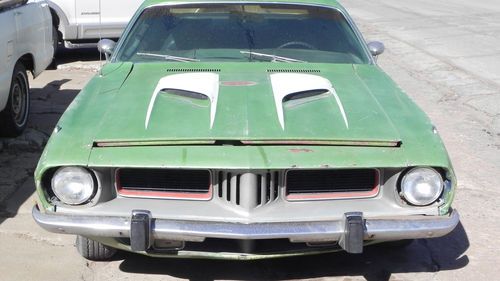 HARD TO FIND SURVIVOR CAR. NICE RUNNING 340, AUTO TRANS. RALLY DASH, FOG LAMPS, AIR CONDITIONING,SWAY BAR PACKAGE. QUARTERS WILL NEED SKINNED. FLOORS HAVE SOME PIN HOLES, TRUNK FLOOR IS DECENT WITH A FEW PIN HOLES. BOTTOM OF CAR LOOKS FAIRLY SOLID. . DISC BRAKES WORK, BUT NEED ATTENTION. WE THOUGHT THE CAR WAS GOOD ENOUGH TO INVEST IN A COMPLETE NEW EXHAST SYSTEM, INCLUDING THE CORRECT TIPS, AND A PAIR OF NEW TIRES ON THE REAR. GLASS IS GOOD, ALL WINDOWS ROLL UP AND DOWN. ITS NOT QUITE AN EVERYDAY DRIVER, BUT SOME TINKERING AND A BRAKE JOB WOULD GET IT CLOSE CUDA IS HAS AN UP TO DATE OKLAHOMA TAG, CLEAN TITLE, READY TO GO.. HISTORY IS NOT KNOWN, EXCEPT THE CAR WAS IN WICHITA FOR A WHILE.. THERE IS NO RESERVE. IF YOU HAVE SENSIBLE QUESTIONS YOU CAN CONTACT ME AT  SUPERSTOCK1@LIVE.COM