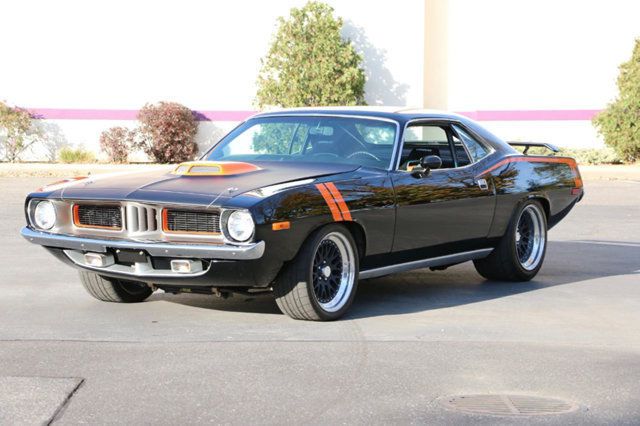 Send me an email at: leenalmmcadory@ukretailers.com .

1973 PLYMOUTH BARRACUDA
TRUE PRO TOURING CAR
THE ERNIE ELLIOTT BUILT MOTOR ALONE WAS $50K
OVER $200k for Complete Build
This is a 1973 Cuda Complete Resto-Mod & is Impeccable!
462ci Ernie Elliot R7 ALL Billet NASCAR Engine
Producing 840hp at 9,000 rpm!
Well Over 200k Invested in the Engine Alone! ALL Aluminum block !
Runs on Pump Gas
RXT McLeod clutch
Custom 4 Link Rear Suspension
CCW Rims 255/40 18 Front on 9 in wheel and 345 30 18 Rear on a 18x12 rim
Mini Tub Rear
Still Has The Back Seat Vintage Air Conditioning & Heat Control Freak suspension with Coil Over shocks Rack and
Pinion Front End Shortened Dana 60 Rear End 4:10 Gears Viper 6 Speed (Tremec Rock Crusher) Transmission Roll Cage
with Custom Interior and Racing Seats 6 Point Racing Harness 20 Gallon Fuel Cell Built for the Power Tour, This
Cuda has been Over 180 mph and is Completely Stable Full Custom 3 Inch Stainless Steel Exhaust ALL The Way Out with
Tail Pipes and it has an sound like nothing else on the Road!
This is a One of a Kind True Restomod, True American Muscle With the Performance of Ferrari or Lamborgini, please
see My 100% Feedback ,