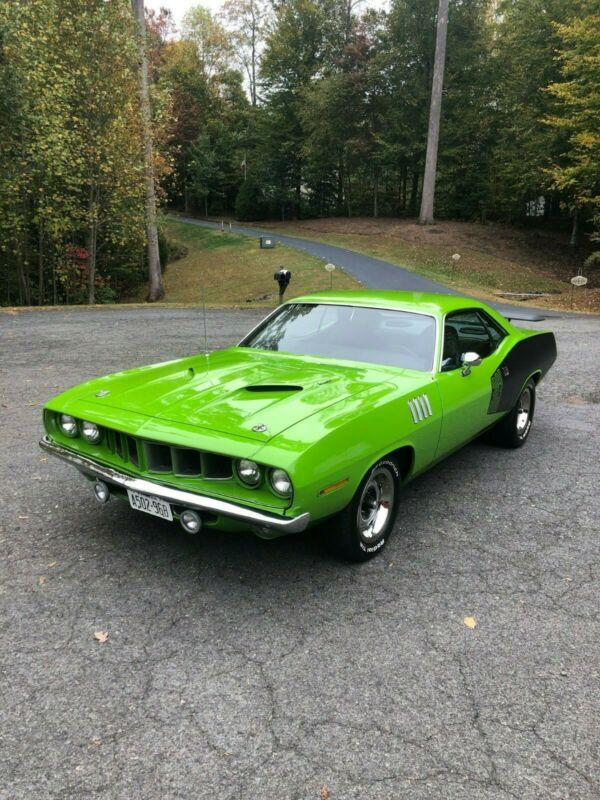 The heart of this car is a big block 383 that came out of a 1968 car. It was completely rebuilt last year with a
mildly aggressive camshaft and ported/polished heads. The points ignition has been replaced with electronic
ignition. While the original engine produced 300 HP, I would expect this one is closer to 350-375 HP. The cam
that we chose has a nice lope to it but is not too aggressive. Backed by the original 4-speed transmission
w/pistol grip shifter and original rear-end, the Cuda performs wonderfully. Finished off with a throaty Flowmaster
exhaust, this car turns heads coming, going, or just plain standing still. The engine compartment presents as well
as the outside of the car. The paint under the hood is show quality. The engine was freshly painted when rebuilt.
The air cleaner has been meticulously restored and displays the correct OEM finish. Opting for headers instead of
the original exhaust manifolds, they are ceramic coated with a polished finish.

Obviously, when driving such a beautiful machine, you want it to stop on a dime. Instead of sticking with the
original drums, I decided to hide Wilwood 4 wheel disc brakes behind those gorgeous rally wheels.

For the interior, the carpet was replaced with a more modern ultra plush cute pile, and the seats and dash are
original but in amazing condition with no rips or tears. As far as tunes, the original radio has been replaced
with an Alpine stereo, combined with 6x9 Sony speakers and amplifier.

Things that do not work on the car - the clock. That's it! I never got around to installing a new one since I had
planned to convert the dash over to the rallye gauges as some point.

Original 383/4-speed car. The Cuda badging was added at some point in the past.

Overall, this is one of the cleanest and straightest Cuda's you will find.