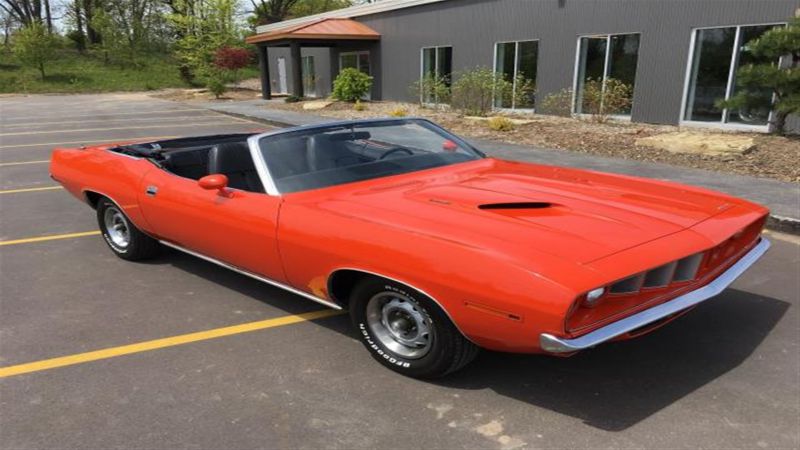 1971 Plymouth Barracuda Convertible 383 Numbers Matching I Am Selling My 1971Plymouth Barracuda Convertible That I Have Owned For The Past 6 Years. This CarWas Made At The Hamtramck Plant Is One Of Only 9 Barracudas To Be Made AConvertible, With A 383 And Automatic Transmission. This Car Was Purchased WithMany Factory Upgrades Including Power Steering, Front Disc Brakes, Vari SpeedWipers, Torque Flite Transmission, High Impact Paint, Racing Mirrors, RallyGauges, 3 Spoke Steering Wheel And Aerodynamic Rear Spoiler. The Orange PaintHas Been Repainted Some Time Ago And Is In Good Condition. The Trim And ChromeAre Original And Look Great. I Have Most Of The Original Parts, Spoiler, Carb,Exhaust. This Is A Very Clean All Original Surviving Car. The Interior Is AllOriginal. The Dash Pad Has No Cracks. The Top Is In Good Shape And Still Has TheOriginal Glass Rear Window. The Top Functions And Latches Properly. I Did HaveAn After Market Cd Player Installed Along With Rear Speakers In The Rear SeatSide Panels. The Engine And Transmission Both Have The Vin Numbers Stamped AndAre Original To The Car. I Have Since Installed A Edelbrock Carburetor AndHeadman Headers With A Dynomax Exhaust. New Bf Goodrich Tires. I Have All Of TheOriginal Documentation To The Car, Build Sheet, Original Fender Tag A
My eMail : kindlundpeyter@yahoo.com