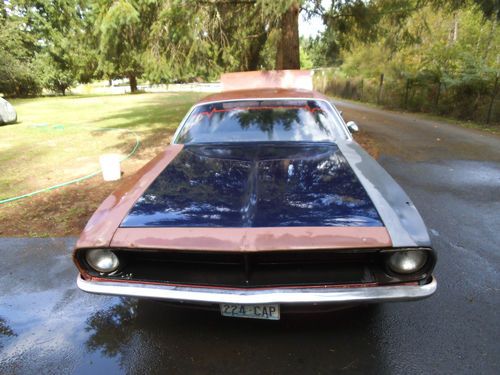 Condition: UsedA vehicle is considered used if it has been registered and issued a title. Used vehicles have had at least one previous owner. The condition of the exterior, interior and engine can vary depending on the vehicle's history. See the seller's listing for full details and description of any imperfections.Seller Notes:"rust in trunk, 1/4's, pass. side rocker in the back, one of sidemarkers is bent and needs replaced, some adjustments on dr.side fender at headlight door needed, door handles are shaved, roof has a dent, engine will for sure need attention"

For sale is my 1970 Plymouth Barracuda, it was originally a lime green car, the previous owner thought that it was a good idea to change a few things but he only got to shaved door handles and a frenched antenna, also the body work and red primer, this was a rather mediocre attempt and did not really get finished, it sat for 23 years and got to me and I am not able to do the car because the '71 Barracuda  takes all my money and energy, so this one needs to go to someone who might finish the car who deserves it, granted it is a project but quite an easy one. It has a 8 3/4 in. rear end, front and rear sway bar, flat hood, decent grill without chrome trim, engine does need some help, it comes also with the pass. side rear quarter that goes up to the body line, also the pass. side drop off, rear valance w/o cutouts, some small parts are missing like the trunk latch and the lower hood latch, the door and rear panels are in very nice original shape, front and rear floors are very solid, some elbow grease and a few dollars can do wonders to this car, thanks for your interest, should you need more info you can drop an email