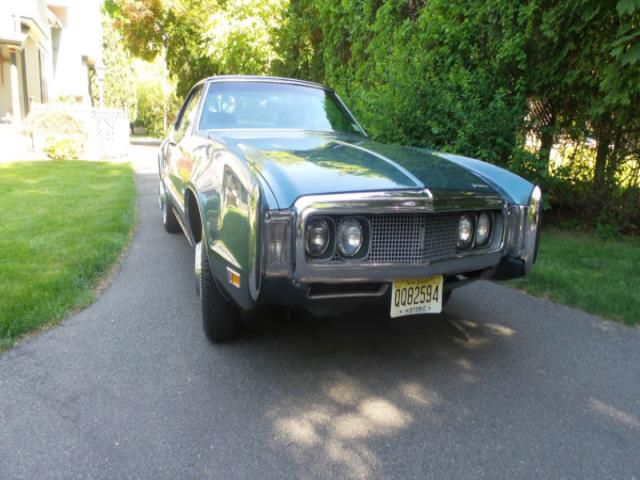 First American Production Front Wheel Car. This is a 1970 Oldsmobile Toronado. I am the second owner and have had it since the early 1990's. The car's body was completely restored in the late 1990's with many replaced body parts. There was no body filler used on the restoration. The paint was several coats of lacquer and 2 clear coats using the original Reef Turquoise Metallic paint. The black interior is all original including the floor mats. The car has the original Toronado am/fm radio - something very rare in 1970! It also has the deluxe wheel covers - These are the heavy ones that cover the entire wheel - not just the center rim. Known issues include: - The AC compressor engages but there is no gas in the system. It needs to be updated to use today's coolant gases. - The interior lights do not turn off so I removed the fuse - I believe it's a switch but am not sure.- Power seat motor works and seat moves up/down and tilts. It does not move forward and backward.- The trunk needs carpeting. The original mat and jack is there but the carpet was removed and never replaced.- The muffler was replaced with a performance muffler and the resonator was not replaced. This makes the car a little louder than stock. - There is a small tear on the front bench seat - driver side.- Transmission fluid leak - This has been an issue since I purchased the car. The transmission works fine but the pan bolts constantly loosen.